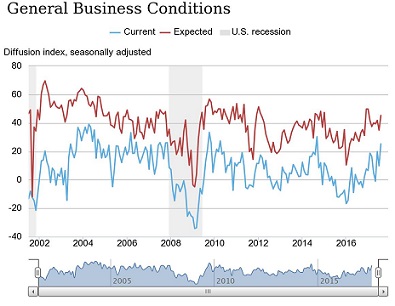 A positive reading indicates expansion or growth in manufacturing activity, while a negative reading on the index indicates a decline in the sector.

The results of the August survey indicate that business activity “grew strongly” for New York manufacturers, the Federal Reserve Bank of New York said in its news release issued Tuesday.

The new-orders index rose seven points to 20.6 and the shipments index edged up to 12.4, pointing to “solid gains” in orders and shipments, the New York Fed said.

Labor-market indicators pointed to an increase in employment and hours worked.