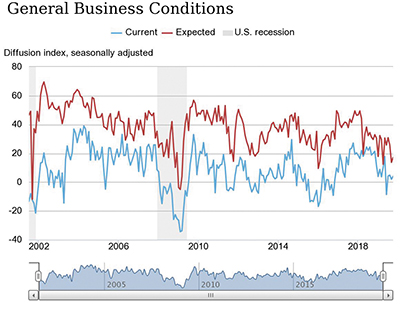 The Empire State Manufacturing Survey general business-conditions index edged up 2 points in the month to 4.0, the Federal Reserve Bank of New York reported on Oct. 14. That beat economists’ expectations of an index reading of 0.8, according to The Wall Street Journal.

The general business-conditions index had declined 3 points to 2.0 in September after rising half a point to 4.8 in August.

The October reading, based on firms responding to the survey, indicates “business activity grew slightly in New York,” the New York Fed said.

The new-orders index was unchanged at 3.5, pointing to a “small increase” in orders, per the New York Fed.

After reaching its lowest level in nearly three years, the shipments index rose 7 points to 13.0, indicating that shipments “picked up.” The unfilled-orders index remained negative for a fifth-consecutive month, suggesting that unfilled orders “continued to decline.” Delivery times decreased slightly, while inventories were little changed.

The index for number of employees came in at 7.6, pointing to “ongoing modest employment gains,” and the average workweek index rose 7 points to 8.3, indicating that hours worked also increased.

Prices increased at a “slower pace” than the prior month. The prices-paid index moved down 6 points to 23.1 and the prices-received index slipped 3 points to 6.3.

Indexes assessing the six-month outlook suggested that optimism about future conditions improved somewhat but remained subdued, the New York Fed said. The index for future business conditions edged up 3 points to 17.1 but remained well below the levels seen for much of the past few years.

The indexes for future new orders and shipments were little changed from September, while indexes for future prices remained fairly elevated. Firms continued to expect solid increases in employment levels but no change in the average workweek in the months ahead.