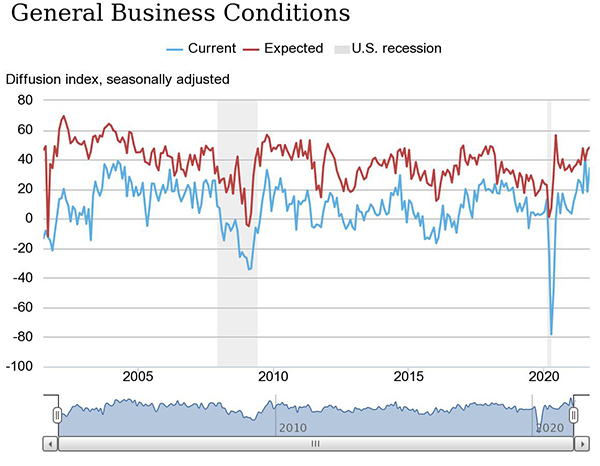 The Empire State Manufacturing Survey general business-conditions index jumped 16 points to 34.3 in September, a rebound from the prior month’s big decline.

It was double the expected September reading of 17.2, according to a survey of economists by the Wall Street Journal.

The general business-conditions index — the monthly gauge on New York’s manufacturing sector — had fallen 25 points to 18.3 in August.

The September reading — based on firms responding to the survey — indicates business activity in New York “grew at a swift pace,” the Federal Reserve Bank of New York said in its Sept. 15 report.

The new-orders index rose 19 points to 33.7, and the shipments index shot up 23 points to 26.9, indicating “strong growth” in both orders and shipments.

The index for number of employees rose 8 points to 20.5, and the average-workweek index increased 15 points to 24.3, pointing to “strong gains” in employment and hours worked.

The prices-paid index held steady at 75.7, and the prices-received index edged up 2 points to 47.8, marking its third-consecutive record high.

The index for future business conditions was little changed at 48.4, pointing to “ongoing optimism” about the six-month outlook.

The indexes for future new orders and shipments rose to similar levels. “Substantial” increases in employment and prices are expected in the months ahead, the New York Fed said.

The capital-expenditures index climbed 11 points to 33.9, a multi-year high, and the technology-spending index rose 18 points to 33.0, a record high.