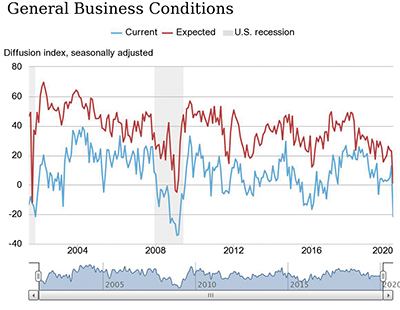 The findings of a new monthly survey appear to indicate the first signs that New York manufacturing activity is getting hit hard by the impact of the global concerns about the coronavirus pandemic.

The Empire State Manufacturing Survey general business-conditions index fell 34 points to -21.5 in March, “its largest point drop on record” and “its lowest level since 2009,” the Federal Reserve Bank of New York said in its March 16 survey report.

Economists had expected a reading of 4.8, MarketWatch reported, citing a survey by Econoday.

The Empire State general business-conditions index had climbed 8 points to 12.9 in February, its highest level in nine months. That was before the coronavirus crisis fully erupted.

The March negative reading, based on firms responding to the survey, indicates business activity fell in New York. A negative index number indicates a decline in the sector, while a positive reading shows expansion or growth in manufacturing activity.

The new-orders index turned negative, falling 31 points to -9.3, indicating that orders fell. The shipments index moved down to -1.7, indicating that shipments were little changed. Delivery times were slightly longer and inventories were somewhat higher.

The index for number of employees slipped 8 points to -1.5, indicating that employment levels were little changed over the month.

The average workweek fell to -10.6, a sign that the average workweek “was shorter,” the New York Fed said. The prices-paid index held steady at 24.5, suggesting that input prices increased at the same pace as last month. The prices-received index slipped 7 points to 10.1, pointing to a “deceleration in selling price increases.”

Firms no longer expect general business conditions to be better over the next six months.

The index for future business conditions declined 22 points to 1.2, its lowest level since 2009. The indexes for future new orders and future shipments fell, but “remained firmly positive,” suggesting that firms expect orders and shipments to be higher compared with this month’s levels.

The capital-expenditures index dipped 3 points to 18.7, and the technology-spending index fell 7 points to 14.4.