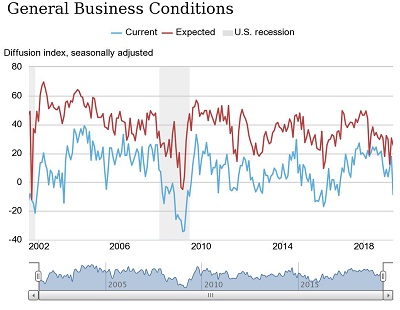 It was also the first negative reading for the index since October 2016, according to the Federal Reserve Bank of New York.

The general business-conditions index had climbed 8 points to 17.8 in May, representing “its highest level in six months.”

The June reading, based on firms responding to the survey, indicates “business activity took a sharp turn downward in New York,” the New York Fed said in its Monday report.

A negative index number indicates a decline in the sector, while a positive reading shows expansion or growth in manufacturing activity.

An article about the survey on website marketwatch.com included reaction from Josh Shapiro, chief U.S. economist at New York City–based MFR Inc. who thought the June index “was shockingly weak, raising a caution flag about the prospects for other manufacturing data in the month.” The article also had reaction from Ian Shepherdson, chief economist at United Kingdom–based Pantheon Macroeconomics, who believes the decline “was likely just a temporary response to the Mexico tariff fiasco.”

The U.S. and Mexico on June 7 reached an agreement to prevent tariffs on Mexico after the country agreed to take measures to stem the flow of migrants into the U.S.

Indexes assessing the six-month outlook indicated that firms were “less optimistic” about future conditions than they were last month.