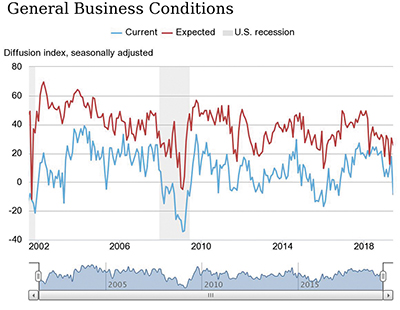 One economist believes concern over the potential for tariffs on Mexican products was a contributing factor to a steep decline in New York’s manufacturing index in June.

It was also the first negative reading for the index since October 2016, according to the Federal Reserve Bank of New York.

An article about the survey on the website marketwatch.com included reaction from Ian Shepherdson, chief economist at United Kingdom–based Pantheon Macroeconomics, who believes the decline “was likely just a temporary response to the Mexico tariff fiasco.”

The U.S. and Mexico on June 7 reached an agreement to prevent tariffs on Mexico after the country agreed to take measures to stem the flow of migrants into the U.S.

The same article also included reaction from Josh Shapiro, chief U.S. economist at New York City–based MFR Inc. who thought the June index “was shockingly weak, raising a caution flag about the prospects for other manufacturing data in the month.”

The June reading, based on firms responding to the survey, indicates “business activity took a sharp turn downward in New York,” the New York Fed said in its June 17 report.

The general business-conditions index had climbed 8 points to 17.8 in May, representing “its highest level in six months.”

A negative index number indicates a decline in the sector, while a positive reading shows expansion or growth in manufacturing activity.

The index for number of employees fell 8 points to -3.5, its first negative value in over two years, “pointing to a small decline in employment levels.” The average-workweek index also fell below zero, to -2.2, pointing to a “slightly shorter” workweek.

The prices-paid index was little changed at 27.8, suggesting input prices increased at about the same pace as the prior month. The prices-received index fell 6 points to 6.8, marking a fourth consecutive decline and “pointing to an ongoing deceleration in selling price increases,” the New York Fed said.

Indexes assessing the six-month outlook were generally lower than last month. The index for future business conditions fell 5 points to 25.7. The indexes for future new orders and shipments fell to similar levels. Firms expected solid increases in employment but no change in the average workweek in the months ahead.

The capital-expenditures index fell 16 points to 10.5, pointing to slower growth in capital-spending plans, and the technology-spending index declined 10 points to 12.8.