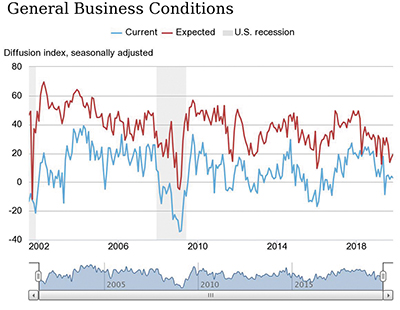 The Empire State Manufacturing Survey general business conditions index declined to 2.9 in November from 4.0 in October.

The November reading, based on firms responding to the survey, indicates “business activity was little changed in New York,” the Federal Reserve Bank of New York said in its Nov. 15 report.

A positive number indicates expansion or growth in manufacturing activity, while a negative index reading points to a decline in the sector.

Economists had expected the November general business conditions index to rise to 5.0, according to a survey by Econoday, a California company that tracks economic reports. So, the report missed expectations.

The new-orders index edged up 2 points to 5.5, pointing to a “small” increase in orders, the New York Fed said. The shipments index fell 4 points to 8.8, a level indicating that shipments grew “more modestly” than last month.

The index for number of employees edged up to 10.4, indicating that employment expanded for the third straight month. The average-workweek index came in at 2.3, indicating a “slightly longer” workweek.

Input-price increases continued to “decelerate,” with the prices-paid index moving down 3 points to 20.5. The prices-received index held steady at 6.2.

The capital-expenditures index jumped 10 points to 19.2, and the technology spending index increased to 15.1.