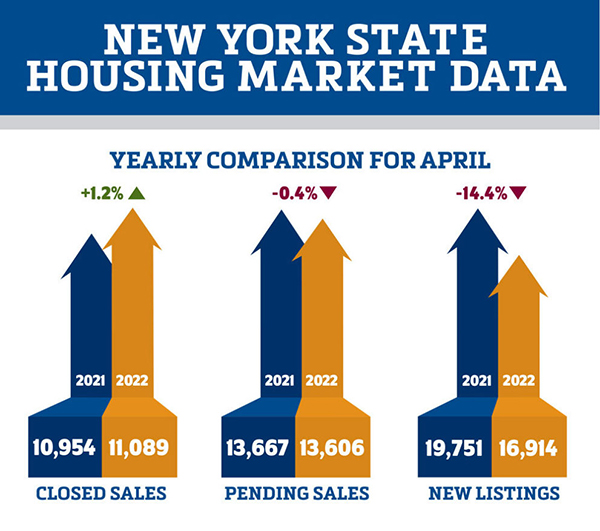 But the big story is the continued sharp rise in home prices amid the tight supply of homes. The April 2022 statewide median sales price was $470,000, up nearly 29 percent from the year-prior median sales price of $365,000, and more than 80 percent higher than the $260,000 median in April 2020. This marks 24 straight months in year-over-year comparisons that the median sales price has increased.

Pending sales, representing homes under contract, totaled 13,606 in April, down 0.4 percent from 13,667 pending sales in the same month in 2021, according to the NYSAR data. This points to a possible slight decline in closed home sales in the next month or two.

The months’ supply of homes for sale at the end of April stood at 2.6 months, down almost 19 percent from 3.2 months a year ago, per NYSAR’s report. A 6 month to 6.5-month supply is considered to be a balanced market, the association says.

All home-sales data is compiled from multiple-listing services in New York state, and it includes townhomes and condominiums, in addition to existing single-family homes, according to NYSAR.