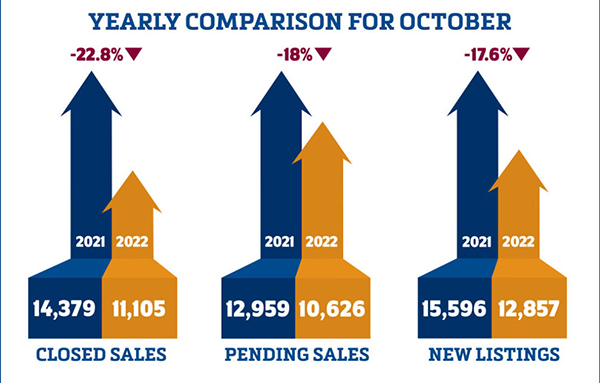 “Interest rates ballooned to the highest monthly average in two decades and housing inventory declined yet again in October, slowing home sales even further across the Empire State,” NYSAR said in its report.

New York state’s months’ supply of homes for sale at the end of October stood at 3.4 months, down slightly from 3.5 months a year ago, per NYSAR’s report. A 6-month to 6.5-month supply is considered to be a balanced market.

Pending home sales in the Empire State totaled 10,626 in October, down
18 percent from the 12,959 pending sales in the same month in 2021, according to the NYSAR data.

All home-sales data is compiled from multiple-listing services in New York state, and it includes townhomes and condominiums in addition to existing single-family homes, per NYSAR.