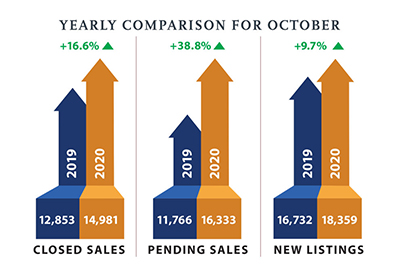 ALBANY — The New York state residential real-estate market roared in October as realtors sold 14,981 previously-owned homes in in the month, up 16.6 percent from more 12,853 homes sold in the year-ago month.

“As the weather gets colder, the New York housing market continues to heat up. Sales remained at higher than normal levels amid continued low inventory across the Empire State,” NYSAR said in its housing-market report.

The months’ supply of homes for sale at the end of October stood at 4.3 months, down more than 23 percent from 5.6 months a year earlier, per the report. A 6 month to 6.5 month supply is considered to be a balanced market.