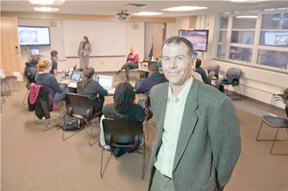 SYRACUSE — A new certificate at the Syracuse University School of Information Studies (iSchool) aims to give students the tools to analyze the massive amounts of information generated pretty much everywhere in the modern world.

The school announced the certificate March 21. It’s the first state-approved certificate of advanced study in the topic area of data science in New York.

Its goal is to give students the skills to analyze and take advantage of large amounts of information for all types of organizations. The program is intended for both graduate students and working professionals.

“This allows people to capture this data and allows people to see patterns,” says Erin Bartolo, the iSchool’s program manager for the data-science initiative. “Predictive analysis is not new, but what is new is the ability to do this with such big data sets.”

The program will also include specializations like data analytics and visualization.

The certificate has roots in science. Several years ago, the iSchool was working with physicists to help them analyze large amounts of data using connected grids of computers, says Jeffrey Stanton, associate dean for research and doctoral programs at the school. It became apparent during that work that the problems faced by physicists in dealing with large data sets were also present in the corporate world.

The new certificate is the result, Stanton says.

The fields involved in data science have been around for a long time, he notes. But they’ve been isolated.

Working with large amounts of data requires expertise in everything from statistics to systems.

“It’s so large and complex that it’s gone beyond any one discipline’s ability to deal with it,” Stanton says of the world of modern data. “You need an interdisciplinary approach.”

Even the simple key-ring tags shoppers get from their local grocery stores generate massive quantities of data every month. It’s
only recently that organizations have started to realize that in the right hands, that information can provide a competitive advantage, Stanton says.

The data-science certificate will give students the chance to pursue more technical careers in fields like software development, he adds.

They could also pursue a different tack and focus on communication and presentation. Many times, organizations need individuals to help bridge the gap between employees with data skills and the decisionmakers, Stanton says.

Another career possibility is data curation. Figuring out the best way to store data sets so they can be easily used in the future for a wide range of applications is critical for many organizations, Stanton says.

Fields in need of those with data-science skills include clinical research, defense intelligence, customer behavior, medical diagnosis, and risk management, according to the iSchool.

A 2011 report from the McKinsey Global Institute, the business and economics research arm of consulting firm McKinsey & Co., estimated that the United States could face a shortage of 140,000 to 190,000 people with deep analytical skills in the next few years. The report also noted a potential shortage of 1.5 million managers and analysts with the knowledge needed to use analysis of big data to make effective decisions.