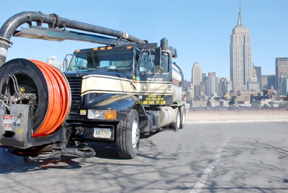 National Water Main Cleaning Co., of Newark, N.J., will hold a grand opening for its new Utica location on March 13. Its new office is at 928 Broad St.

The firm provides sewer-system cleaning, studies, inspections, and repairs. It started looking for a Utica location in order to work on state-mandated repairs to the Sauquoit Creek sewer line in Oneida County, according to Gary Millington, National Water Main Cleaning’s Utica office superintendent.

“It’s the Sauquoit Creek Basin,” he says. “They’re under a consent order to do the whole basin to stop the overflow. It’s a sanitary line, and when it rains too hard, it overwhelms the system and dumps into the Mohawk River.”

In the three months leading up to the office’s grand opening, National Water Main Cleaning hired seven new employees to work out of Utica, according to Millington. Then it hired an office employee to begin work Feb. 25. Millington was previously the company’s only employee based in the area.

Other employees have been in Utica temporarily to work on projects, Millington adds. But they were typically based in a National Water Main Cleaning Co. location in Canton, Mass.

Millington wants to expand the Utica location in the future. Its easy access to Albany, Syracuse, Rochester, Binghamton, and Ithaca makes it an ideal location to serve other cities, he says.

“It’s a central location,” Millington says. “We definitely have to get more work.”

Within Oneida County, an office in Utica’s Broad Street was attractive because it is near the New York State Thruway, Millington continues. Workers will be able to easily travel to the different locations where they will have to work, he says. He estimates employees will not need to travel for any more than 20 minutes to work on the project.

National Water Main Cleaning is leasing 10,000 square feet for its office. About 1,000 square feet of that is dedicated to office space, with the rest set aside to house equipment. The company is leasing the space from property owner David Mazloom, Millington says.

Renovations were necessary to prepare the new office. Crews installed a new floor drain, paved the building’s parking lot, and added fencing. They also built in the 1,000 square feet of office space.

The building’s landlord handled the renovations, according to Millington. The cost is built into National Water Main Cleaning Co.’s lease, he adds.

Millington says he does not have access to sales totals or revenue projections. National Water Main Cleaning Executive Vice President Jim Lounsbery did not respond to requests for comment.

The Sauquoit Creek sewer repairs are estimated to cost over $180 million. The new National Water Main Cleaning Co. office won’t handle all of that work — it has to bid separately on different parts of the job over several years, according to Millington.

He stresses that having an office in Utica is a big move for the New Jersey company.

“We really didn’t have an office here,” he says. “We were parking at the town yards. And then we were renting space at a garage.”

National Water Main Cleaning Co. is a part of Chicago–based Carylon Corp., an environmental-maintenance company with subsidiaries in 18 states.