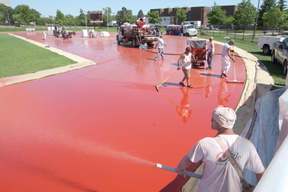 CLAY — Nagle Athletic Surfaces, Inc., currently operating at 7709 Maltlage Dr. in Clay, has added a long-time competitor to its payroll, as the firm prepares to move into a larger space in the DeWitt area later this year.

Since its inception in 1992, Nagle Athletic Surfaces had competed with the Paul Brown Company of Syracuse for bids on sports-surfacing projects.

Now, the two firms are part of the same team.

Paul Brown joined Nagle as the general manager of its sports coatings and streetscapes division on Feb. 11, says Paul Nagle, president and part owner of the 21-year-old company.

He says Nagle Athletic Surfaces made an “employment agreement” with Brown to begin working for the firm.

“We didn’t purchase any stock at all. He kept his assets and is selling his assets on his own … the equipment and other things,” Nagle added.

The Paul Brown Company of Syracuse provided tennis and game-court surfaces for more than 30 years.

“He brings to us some market share that he had held in his business and he also brings the experience to run that part of our business,” Nagle says.

In explaining streetscaping, Nagle describes it as work that is meant to improve curb appeal. Some of the products the firm uses, such as Porous Pave, are designed in a way that allows water to seep into the ground, as opposed to running off into a sewer system, he says.

With the addition of Brown, Nagle Athletic Surfaces now employs 12 full-time employees and between 20 and 25 seasonal employees, including two or three installers from Brown’s former company.

Nagle co-owns the firm with Phillip Schiavone and Raymond Schiavone, but declined to disclose each man’s percentage share of ownership.

Besides its sports coatings and streetscapes division, Nagle Athletic Surfaces also has a running-track division that builds the polyurethane tracks at schools and colleges. In addition, Nagle has a stadium care business line.

Besides its work as a surface installer, Nagle also serves as a subcontractor. For example, Nagle worked for Barrett Paving Materials, Inc, of Clay installing the methacrylate coating for the bike path on the Connective-Corridor project near Syracuse University.

Nagle Athletic Surfaces generated revenue of about $6 million in 2012 and is hoping to increase that to $8 million this year, Nagle says.

Founded in 1992, Nagle Athletic Surfaces currently operates in about 2,200 square feet of office space and 4,000 square feet of warehouse space. The firm owns its facility on Maltlage Drive, he says.

Nagle Athletic Surfaces has plans to move to a new location in November once the construction-project season is complete for the year. It has a purchase offer on a three-acre property at 6597 Joy Rd. in DeWitt that includes 2,500 square feet of office space and 7,500 square feet of warehouse space.

The firm has simply outgrown its space in Clay, Nagle says.

“Our office staff is pretty well cramped. Our warehouse spacing is inadequate to house our equipment and our materials that we bring in and store during the summer,” he says.

Nagle is purchasing the property from Peter Lowe, who previously operated Syracuse Safety Lites in that same location, according to Paul Nagle.