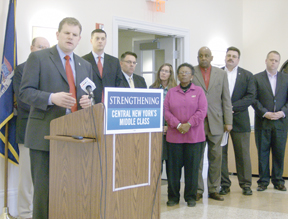 Maffei, who represents the 24th Congressional District of New York, used the announcement to mark his first 100 days in office.

Maffei’s plan includes investing in small businesses, creating public and private partnerships, focusing on education and workforce development, improving infrastructure and transportation, and utilizing the region’s competitive advantage, including its proximity to population centers and its abundance of colleges and universities.

The plan followed what the lawmaker referred to as, “a district-wide listening tour” that focused on job creation and economic growth following Maffei’s return to office as a Congressman.

“It lays out essentially what we’ve heard and some of the basic conclusions that we can make from it,” Maffei said.

In total, Maffei says he heard from more than 150 small-business owners and economic-development leaders. He also toured local manufacturing plants, businesses, and hospitals over the past few months.

Maffei visited businesses such as the Auburn location of Charlotte, N.C.–based Nucor Corp. (NYSE: NUE); the Oswego location of Atlanta–based Novelis, Inc., an aluminum-product maker; as well as Upstate Medical University and the South Side Innovation Center in Syracuse, according to Maffei’s office.

Maffei called upon leaders in the Central New York economic-development community to share details about the various components in his jobs plan, including investment in small businesses.

“The plan that the Congressman has laid out calls for leveraging our strengths in key industries … biomedical, clean technology, advanced manufacturing, agriculture, tourism,” Robert Simpson, president and CEO of CenterState CEO, said during his remarks.

CenterState CEO is a Syracuse–based nonprofit organization focused on business leadership and economic development in a 12-county region of Central New York. It represents more than 2,000 members.

Simpson referred to those sectors as “places where we have strong capabilities” for helping to reduce the regulatory burden on small businesses, providing targeted-tax relief to small businesses that are looking to hire and train employees.

Companies talk a lot about the need for skilled workers that they can’t find. “but as long as we provide and create the linkages that the businesses need, we can put people back to work,” Taliercio said.

The report talks about giving tax incentives to employers who take the lead in keeping their workers’ skills current and provide the training needed by the new workers they’ll hire.

In recent years, she said, many workers have lost their jobs due to unfair trade agreements.

“Existing worker-training programs like the Trade Adjustment Assistance need to be maintained and expanded so that these displaced workers can get back to work. All anybody wants to do is work and provide for the family,” Taliercio said.

Besides small-business investment and workforce development, the report also lists improved infrastructure and transportation as a key component to building a strong economy.

Infrastructure is the foundation on which our community, and truly our society, is based, says Orrin (Mac) MacMurray, chairman of Salina–based C&S Companies, who also spoke during the event.

C&S is a group of companies specializing in a range of services, including transportation, civil infrastructure, construction, energy, and planning.

“The American Society of Civil Engineers recently published a new report card on American infrastructure, and gives the infrastructure of our country nationally a D-plus, not a grade that I think any of us are proud of,” MacMurray said at the event.

New York has more than $27 billion in drinking-water needs that need to be addressed in the next 20 years, according to MacMurray. In addition, the state has more than $30 billion in needs in wastewater treatment. New York also has 141 public-use airports, and Hancock International Airport locally also needs “continued improvement and development,” MacMurray said.

He also called the Port of Oswego a “great resource” that needs improvement and development to improve its infrastructure. And about 60 percent of New York’s 115,000 miles of roads are considered to be in poor to mediocre condition, according to MacMurray.

“Thousands of people, as have been recognized in this report, could be working today if we were addressing these needs effectively. One billion dollars in infrastructure investment leads to between 30[,000] and 35,000 jobs,” MacMurray said.

After the time spent Maffei spent listening, he said the report is intended to start the conversation.

“It’s clearly a basic document. We’re not talking about a doctoral thesis here. We’re talking about something that lays some key areas, some key themes that I heard throughout the district from many, many people,” Maffei said.