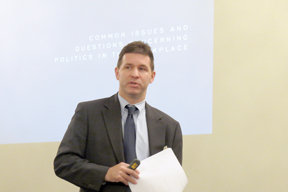 “It’s election season,” said Christian Jones, a partner in Mackenzie Hughes LLP’s business department. “Along with that season can come some difficult issues for employers with respect to politics in the workplace.”

Jones spoke at a Labor Law Review seminar that his Syracuse–based law firm held at Drumlins Country Club in the town of DeWitt. Nearly 30 people attended the event.

A common question tied to the political-campaign period is centered on free speech, Jones said. Freedom of speech does not necessarily apply to employees expressing political views in the workplace, he continued.

Public-sector employers face a trickier situation, he added, as employees of governmental agencies have greater First Amendment protections. But public-sector workers still don’t have the right to disrupt their workplace, harass fellow employees, or antagonize other staff members.

“Not everyone wants to go that far, and, let’s be honest, a lot of people can discuss political issues in a completely civil manner,” Jones said. “At a minimum, if someone’s viewpoints and activities are getting to the point where it’s interfering with work, it’s interrupting your whole process, it’s infringing upon your business objectives, you have the right to take some type of disciplinary action.”

Jones cautioned employers to be careful when taking such action, however. Enforcement of policies against harassing others must be evenhanded, he said. Employers should not act only against workers who do not share their own political points of view.

Later, Jones talked about political campaigning. Private employers can generally restrict political campaigning at work, he said. Employee handbooks commonly have rules against solicitation and distribution during work hours and in work areas — rules that would cover such actions undertaken as part of a campaign, he said.

Again, he stressed the importance of across-the-board enforcement of such rules.

“You can’t just enforce it with respect to campaign materials and union materials,” Jones said. “You have to prohibit all solicitations during working times and in work areas.”

Picking and choosing which distributions to ban would make a no-distribution rule invalid, he added. If it were applied only to union materials, it would be considered an unfair labor practice by the National Labor Relations Board, Jones said.

State law does prohibit employers from acting against employees for their legal political activities away from work, according to Jones. Unless a political activity could cause a material conflict of interest related to the employer’s business, an employer cannot discipline a worker for running for public office, campaigning for a candidate, or participating in fundraising activities away from the office.

Another state law entitles employees to take time off from the job so they can vote if they do not have sufficient time to do so outside of working hours. The rule only comes into play if an employee does not have four straight hours before work or after work when the polls are open.

Employees wishing to take time off to vote have to inform employers between two days and 10 days before the election, Jones said.

“You probably have some type of bulletin board with all of your notices up,” he said. “It’s probably a good idea to do a posting [of this law.] And you have to do it at least 10 days before Election Day.”