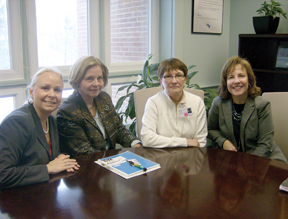 DeWITT — Loretto plans to move PACE CNY’s Catherine McAuliffe Center to a new facility at 115 Creek Circle, across from the East Syracuse Fire Station No. 2, in June.

The 38,000-square-foot building sits on a 10-acre property that will include parking for 30 shuttle buses and 130 cars.

The center’s move also means the health-care services it provides are also moving.

PACE CNY has operated in a 15,000-square-foot space on the first floor of Loretto’s main campus — on Brighton Avenue in Syracuse — since 2000. It has outgrown the space and needs to expand.

“We felt … really the only way we could continue to serve people and expand in our community is to build a new center,” says Penny Abulencia, senior vice president and director of PACE CNY at Loretto.

The Brighton Ave. space has been “cramped” for the last three to four years, she adds. The organization decided to pursue the new center in 2010.

Loretto submitted an application for a “limited” certificate of need (CON) for the McAuliffe Center’s diagnostic and treatment center, says Abulencia.

Its diagnostic and treatment center provides primary care, along with dental, podiatry, and vision care, she adds.

“Our dental department [also] serves Medicaid [patients, including] children [and] adults, not related to PACE … that’s going to be in that building,” says Abulencia.

That application wasn’t for the entire new McAuliffe center, but for the “smaller portion” of that center because it’s New York state regulated, she notes.

Loretto had to request permission to move the diagnostic and treatment center, says Abulencia.

Loretto provides care for the PACE CNY program through the diagnostic and treatment center (the PACE CNY clinic) and the licensed agency for home care.

“We really coordinate that specialty care, providing it when it’s needed but many times, we can manage it in the center and that’s what we do,” she adds.

“….to hear the numbers of medication that any one person is on at any time is mind boggling … through the PACE program, they can manage those medications and, many times, reduce [them],” the Loretto CFO adds.

PACE CNY works at “maximizing people’s opportunity to age well in their own homes,” says Abulencia.

Loretto has the oldest-age PACE program in the country, she contends.

“They are staying with us five years because we are improving the quality of their life and their health,” Abulencia contends.

Diverting people from skilled nursing facilities and keeping them in their homes with services is “really a huge push” on the part of the both the federal and state governments, according to Townsend,

“PACE was probably one of the pioneer programs that the federal government and the state government brought together to try to do that. It’s still a model. It’s the model of the future,” says Townsend.

Construction on the new facility in DeWitt started in June 2014 and should finish in April, says Kirk.

When asked about the new center’s amenities, Kirk explained that the new center will include smaller activity rooms for arts and crafts; larger rooms for lunch and gatherings; heated flooring in the bathing area; and a larger salon area.

“[PACE enrollees] are [also] going to have an outside patio area that they’ll be able to enjoy,” says Kirk.

Once PACE CNY moves to the DeWitt location, Loretto will consider several possibilities for the available 15,000-square-foot space, including expanding its rehabilitation services, says Townsend, the Loretto CEO.

It’ll be part of Loretto’s strategic plan covering the years 2015 through 2018 as the organization reviews its entire campus “as a whole,” Townsend adds.

The current program at Loretto serves about 270 people, while the new building can accommodate and serve about 400 residents, Abulencia says.

About 80 employees will move to the new McAuliffe Center in DeWitt.

PACE CNY is a nonprofit corporation that Loretto owns and sponsors, according to its website. The organization, a community-based, managed-care program, describes itself as an “alternative to nursing care that allows the frail elderly to continue to live in the community.” The acronym PACE is short for a program of all-inclusive care for the elderly.