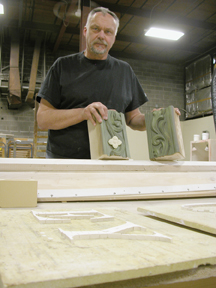 DeWITT –– Shenfeld Studio, a local ceramic tile designer and manufacturer, is settling into its new, larger location at 6361 Thompson Road in DeWitt. The business moved there Jan. 1 from 1005 W. Fayette St.

Shenfeld, who started his Syracuse–based ceramic studio 15 years ago, says he is excited about his firm’s new location because of its added design space and interior loading dock. The firm’s new address features a 12,000-square-foot studio and gives the company access to 200,000 square feet of shared loading-dock space that’s heated and enclosed.

“We have trucks that come in, in the middle of a snowstorm, to pull in to the loading dock, and the door closes behind them,” he says. “It’s a heated space that we can load or unload our products, or load some of our shipments into one of our vehicles in the loading dock.”

Shenfeld Studio’s previous location was only 6,000 square feet and did not have a ground loading dock.

Shenfeld says his company has been making tiles for furniture retailer Stickley Audi & Co., for the past 14 years. In addition, it has also been reproducing decorative terra-cotta tiles for the New York City subway system.

Shenfeld Studio is working on developing a line of high-end tiles for kitchen backsplashes and bathrooms, Shenfeld says. The company also works with architects, conservators, and historical preservationists on projects all over the country.

He says the firm is currently working on 11 projects, and the number of major projects can go up to 30 or 40 per year. Shenfeld Studio produces annual revenue of about $500,000, according to Shenfeld.

He says the annual revenue has been flat, but the firm has generated growth with its subway and state projects.

One of the construction projects for which Shenfeld Studio is providing tiles is the Fulton Street Transit Center, which will connect six existing subway stations in lower Manhattan.

“They are doing a new transit hubway there, and the terra cotta that we are producing matches the original ... pottery.”

He says the studio has also been doing historic restoration of the 100-year-old terra cotta at the subway station at Columbus Circle, in midtown Manhattan.

The studio has seven kilns used for the firing of clay to make tiles, with firing schedules controlled by different computer programs, says Shenfeld. Staff also uses a hand press and a machine press to help make tiles.

“We have a 120-ton press for pressing the clay together with the machine,” he says, “and we have extruders to make the clay or push the clay out into a pattern or a design out of a die.”

Although the 10-employee Shenfeld Studio works primarily on projects that are not in Central New York, Shenfeld says he has no desire to move his company out of the area because he finds the work force in Central New York to be diverse and skilled. He says a couple of his employees are from Nepal.

“I think that we are a unique, one-of-a-kind company that is surviving the climate that’s difficult, where people are cutting back on things that are one-of-a-kind,” he says. “We are able to be diverse enough that we can kind of roll with the punches, and I think that’s why we are still here.”

Shenfeld says the studio is trying to finish up three to four projects within the next month, and is expecting a whole new round of projects to emerge in the spring.

“We are working on bidding on a project in Miami,” he says. “They are building a new Museum of Science in Biscayne Bay, and we are currently in the design phase of a 31,000-square-foot mosaic on one part of the building. And one portion of it is going to be in the aquarium.”

Shenfeld says the studio is considering buying new machines to develop a tile that will be frost-proof and manufactured in the United States. He believes it will differentiate it from other U.S. competitors.