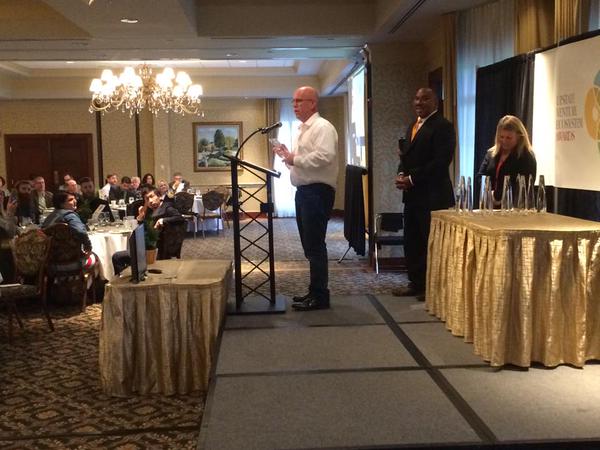 VERONA, N.Y. — John Liddy, who directs the Syracuse Student Sandbox program at the Syracuse Tech Garden, and serial entrepreneur Chuck Stormon were among the winners at the first-ever Upstate Venture Ecosystem Awards.

Liddy won the “Campus Connector” award, which recognizes the work of a person affiliated with an educational institution who is “leveraging on and off-campus resources and connections to spin-out research startups and/or create opportunities to retain entrepreneurial students,” according to a news release from UVC and UVANY.

He oversees the Syracuse Student Sandbox, an “incubator that helps aspiring entrepreneurs push their ventures from idea to company,” according to its website.

Besides his work with that program, Liddy also is the entrepreneur-in-residence at the Syracuse Tech Garden, the Madden School of Business at Le Moyne College, and at the ThINCubator at Mohawk Valley Community College.

Stormon won the “Magical Mentor” award, honoring a person who has had a “transformative impact on the trajectory of one or more startup companies.”

The news release described Stormon as a “serial entrepreneur with multiple venture-backed companies.”

Stormon is an angel investor with the Seed Capital Fund of CNY, LLC. Based at the Syracuse Tech Garden, the fund allows its members to “invest in and guide early stage technology companies in Syracuse and Central/Upstate New York,” according to its website.

Stormon is also the CEO of RushTera, a firm that works “to make sharing big files less painful,” according to its website.

A man who serves as a mentor in the StartFast Venture Accelerator took home the “Ecosystem Champion” award, honoring those “who are catalyzing and supporting startup activity across multiple Upstate communities.”

Zach Schulman is a member of the UVC board of directors and a managing partner with the Lansing–based Cayuga Venture Fund.

In addition, Schulman is a professor in the Samuel Curtis Johnson Graduate School of Management at Cornell University and the director of the school’s Entrepreneurship at Cornell program.

UVC and UVANY recognized Buffalo attorney David Colligan as a “Community Catalyst,” someone who organizes “programs to bring together diverse startup ecosystem players in a local community and/or increase the amount of capital and number of active early stage investors in that community.”

Colligan is a founding member of Buffalo Angels, according to a news release posted Friday at the website of Colligan Law LLP. Buffalo Angels is an angel-investor network that is a division of the Western New York Venture Association.

Deal of the Year

Besides the individual awards, UVC and UVANY also recognized M/A-COM Technology Solutions’ (MACOM) acquisition of Ithaca–based BinOptics Corp. as the “Deal of the Year.”

Lowell, Massachusetts–based MACOM (NASDAQ: NTSI) announced in December 2014 that its acquisition of BinOptics had closed.

Binoptics had accumulated nearly $39 million in funding “throughout 6 rounds,” and was sold for $230 million in cash, according to the Ecosystem Awards news release.

“The BinOptics sale to M/A-Com Technology Solutions was a great Upstate venture capital success story. Several leading venture VC funds from the Upstate region invested in the company, helping BinOptics to achieve significant returns on their investment upon the exit, and allowing them to continue making investments in the Upstate region,” Sam Ticknor, UVANY executive director, said in the release.