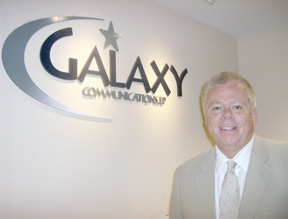 SYRACUSE — Edward (Ed) Levine, the president and CEO of Syracuse–based Galaxy Communications, LP, is planning to become full owner of his company that operates several radio stations in both Syracuse and Utica.

Levine has partnered with Alta Communications, a Waltham, Mass.–based private-equity firm that has served as Galaxy’s majority owner since 2000.

“They’ve been in the company for 12 years, which, for private equity, is two-and-a-half lifetimes,” Levine says.

Levine approached Alta at the end of 2012, and indicated his interest in making an offer to buy Alta’s ownership stake in Galaxy for $13 million, he says. The firm accepted the offer.

“So my joke is … Galaxy is being sold to me,” says Levine.

New York City–based Atalaya Capital Management LP is providing the financing, according to Levine. Atalaya describes itself as an “alternative-investment firm primarily focused on investing in credit opportunities,” according to its website.

Each plans to file for a full transfer of control with the Federal Communications Commission. The FCC will then have to approve it.

“I would anticipate that by the early Fall, I will be the sole, 100 percent equity owner of Galaxy,” Levine says.

“By removing a significant amount of debt from the company, it gives us tremendous flexibility to either … look at other acquisitions in the broadcast field, look at other acquisitions in the event field, and being able to continue to invest in the product without worrying about debt levels that might not have been market levels anymore,” Levine says.

When asked how the transaction removes debt from the company, Levine says, “We were able to buy out Alta at a number significantly less than what was owed as they are winding down their fund.”

Alta Communications typically invests between $10 million and $30 million of equity in each of its portfolio companies, according to its website

Galaxy acquired nine Clear Channel stations in the Utica–Rome market in 2007, and then sold five of the stations to two other companies to comply with federal ownership restrictions, according to articles published in The Central New York Business Journal.

In Syracuse, Galaxy operates WTKW-FM (TK99/TK105), which serves as the flagship station for both Syracuse University football and men’s basketball broadcasts. Its sister-station, ESPN Radio 97.7 FM/100.1 FM (which also transmits at both 1200 AM and 1440 AM), broadcasts men’s lacrosse and women’s basketball games.

Besides TK99/TK105, ESPN Radio, and KROCK, Galaxy also operates Syracuse radio stations that include Sunny 102 (WZUN 102.1 FM, 106.1 FM in Oswego) and ESPN Deportes (WSCP 1070AM in Oswego), which is ESPN’s Spanish-speaking network, according to the Galaxy website.

Galaxy Communication employs about 80 people between its Syracuse headquarters and the location in Utica. Most of the employees, or between 70 percent and 80 percent, work in the Syracuse location, Levine says.

The Utica stations operate at 39 Kellogg Rd. in New Hartford, according to the Galaxy website.

As Levine takes steps to become Galaxy’s full owner, he’s noticing a trend in the Syracuse radio market and has a theory as to why it’s occurring.

Advertising revenue in the Syracuse radio market through May 31 is up about 12 percent compared to the same time period in 2012, according to Levine.

Levine believes the reduced print schedule for The Post-Standard for delivery to homes and newsstands is a factor in the increased radio-advertising revenue.

The reduced print schedule took effect earlier this year when the Syracuse Media Group became the parent company of both the newspaper and its sister website, Syracuse.com.

When Galaxy crafted its budget for 2013, Levine and his team believed the advertising revenue in the Syracuse radio market would increase two to three percent over the 12-month period.

“That was our best guess,” he says.

Levine has operated in the Syracuse radio market for about 20 years, he says, and can’t recall seeing a double-digit, year-to-date advertising revenue figure like the figure for May.

“The industry itself has not gone up double digits,” he says, figuring the revenue increase in the Syracuse market isn’t part of a national trend.

The newspaper reducing its weekly print schedule is a “major difference” in the Syracuse market compared to any others, Levine says.