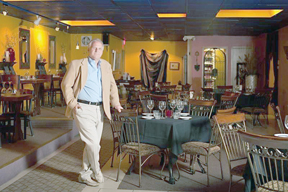 The high-end restaurant in the village of Baldwinsville opened La La Land, a cake shop and creamery that also deals in chocolate and coffee, in July. And its owner, Dennis Sick, believes the expansion will help the manor sweeten its offerings — and its bottom line.

“La La Land is an old-style ice-cream and dessert place,” he says. “Ultimately, it will help us boost our dessert presentations and sales.”

Sick decided to start offering lunch at La La Land in the New Year. He expects it to help Mohegan Manor post revenue growth between 10 percent and 15 percent in 2013. He declines to share specific revenue totals, saying only that increasing sales in 2013 would mark the fifth consecutive year of growth at Mohegan Manor.

“Longevity builds,” he says. “I think it’s a very unique experience for the Syracuse metropolitan area.”

Mohegan Manor targets customers from throughout the Syracuse area, from Jamesville and Fayetteville to Oswego and Auburn. Many of its patrons are businesses looking to meet with clients in a setting that’s more unique than a hotel, according to Sick.

The manor is located in an 18,000-square-foot structure that Sick owns through a holding company, Ronam Inc., at 58 Oswego St. in Baldwinsville. But it’s comprised of a series of smaller rooms and sections. It includes the Restaurant at Mohegan Manor, a banquet facility, Club Sushi, and La La Land.

“The building is separated into several different areas, so although it’s large, it always feels small,” Sick says. “We have like 10 fireplaces in our building. People really like it.”

A separate building at 56 Oswego St. actually houses the 1,000-square-foot La La Land — a deck connects the dessert shop to the rest of the manor. Sick purchased La La Land’s building June 14 with another holding company, JD Sick Inc. He declines to share details of the transaction, although records from Onondaga County’s Office of Real Property Tax Services shows JD Sick Inc. bought the building for $86,500.

Sick overhauled La La Land’s space before opening it, a major revamp that included heating and lighting. He performed nearly all of the renovations himself and had the shop open 27 days after purchasing it, he says. In the future, he wants to turn the upper level of 56 Oswego St. into apartments.

“We’re doing a winter series of the old-fashioned nightclub where we will have a dinner dance, a full band, orchestra-type, where people can get dressed up,” Sick says. “We’re shooting for the last Saturday of each month. We’ll bring a nice date-night, something Syracuse doesn’t really offer. There are no dance clubs for couples to go out and have a nice dinner.”

Sick tries to bring new attractions to Mohegan Manor. For instance, it will rent some space to a bartending school in 2013.

“For us it’s a little bit of rent revenue,” Sick says. “But it’s more that the market needs more bartenders and better-trained staff. I was happy to do it kind of as an incubator.”

Mohegan Manor is sometimes seen as being off the beaten path, Sick points out. It combats problems arising from that perception by operating a courtesy shuttle. Additionally, it caters to a clientele that isn’t afraid to travel.