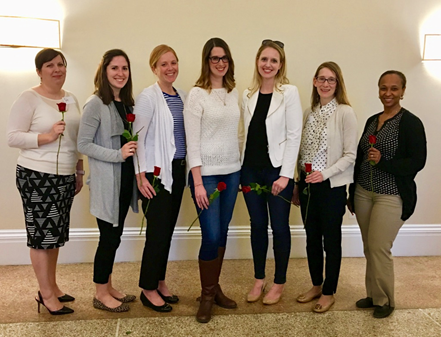 SYRACUSE, N.Y. — The nonprofit Junior League of Syracuse, Inc. announced that it has formally welcomed a new membership class of nine women.

The Junior League says it is an organization of women committed to promoting volunteerism, “developing the potential of women and to improving the community through the effective action and leadership of trained volunteers.” Its mission is educational and charitable.

The new members, from across Central New York, spent their provisional year learning about the league and engaging in volunteerism with organizations ranging from Vera House to the Rescue Mission. They also participated in the Holiday Shoppes, the Junior League of Syracuse’s annual fundraiser held at the New York State Fairgrounds each November. This spring, they helped with Corks and Forks, a fundraiser that includes a wine pull and raffle.

The Junior League of Syracuse says it was founded in 1920 and is part of an international organization that promotes local volunteerism and “strives to develop the skills and talents of its members.” The Junior League of Syracuse works with many organizations with all activities centering around “enriching the quality of life for women, children, and their families in Central New York.”

The league recruits on an annual basis with new members starting their year-long training class in the fall and officially joining as members in late spring. For more information about the Junior League, visit jlsyracuse.org.