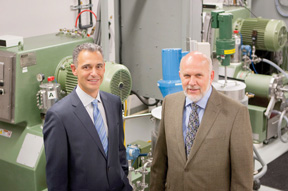 The firm’s core technology involves the production of very small particles on the micron to nano scale. Those particles have a range of applications, but Primet has been focusing on materials used in manufacturing lithium ion batteries, a market worth billions of dollars, says Lawrence Thomas, Primet CEO.

Licensing was always a probable path forward for Primet, Thomas notes. Establishing the kinds of manufacturing plants it would take to compete with major players in the industry requires resources and expertise the company simply doesn’t have.

“Our strategy is not to sell materials,” Thomas says. “That market is dominated by multibillion dollar chemical companies. That’s not us.”

Rather than compete with those firms, Primet wants to partner with them.

But that doesn’t mean the company will stop growing in Ithaca. In fact, Primet has hired five or six people in the last four months and now employs 32.

Primet is housed in 20,000 square feet at the South Hill Business Campus in Ithaca. Its facility is home to a smaller-scale version of its production technology so potential license partners can see it in action.

Primet has been adding some new equipment lately to bring its operations to an industrial scale, Thomas says. The company can now demonstrate for partners how it can go from making grams of material to tons.

The Ithaca facility can also produce larger amounts of material so partners can have samples and enough material for sales while a partner implements Primet’s technology at its own plants, Thomas says.

The long-term goal is for Primet’s technology to be deployed across the battery industry in as many different types of batteries as possible. And once that’s done, the company’s technology has applications in other markets, Thomas says.

He says he’s already in talks with companies on potential licensing agreements. Primet announced the licensing strategy in November.

Primet has won a number of grants over the years including three from the New York State Energy Research and Development Authority for $440,000, $250,000, and $400,000. The company is also a founding member of the New York Battery and Energy Storage Technology Consortium.

Primet’s technology has applications in the military as well as the private sector. The company received two research and development contracts from the Defense Department in 2010.

The Army Research Lab was impressed enough with the results that they initiated a second phase of work with the firm that is starting now.

Primet says its technology can help the Defense Department reduce the size and weight of batteries soldiers must carry with their equipment and increase their available power.