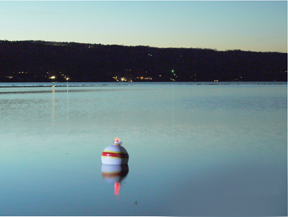 The company’s technology was developed by Angel Martinez, a senior research technician at Cornell University. The system involves a kinetic-power generator that is activated by movement, says Alessandro Anzani, WavElectric CEO.

The generator is housed inside a floating buoy. Its one moving part is not exposed to sea water or the outside air, Anzani notes.

That makes it more resistant to damage than some other wave power systems.

“They’re exposed to high wear and tear,” Anzani says. “The joints they have eventually fail in marine water. Our generator is sealed at two levels.”

In addition, the generator WavElectric uses activates with any motion, not just movement in a specific direction, Anzani says.

Wave power in general has the potential to be more cost effective and reliable than other renewable sources like solar or wind, he adds. Waves, he notes, are constant.

Even in ideal locations, blowing wind and shining sun are intermittent. Wave power could also be available in more locations than wind and solar, Anzani says.

Initially, the company plans to deploy the system to power marine-monitoring devices. There are about 50,000 buoys floating throughout the world’s oceans, Anzani explains.

They track shipping traffic, water quality, weather, and more. They all run on batteries that need to be replaced regularly.

WavElectric’s systems could integrate with the devices to keep them powered constantly, Anzani says. The firm is already talking with marine monitoring companies about its technology.

Eventually, Anzani and Martinez want to scale the system and build offshore arrays that could transmit electricity back to land and even into the power grid, Anzani says. The system’s output can range from a few watts up to several megawatts of power.

WavElectric is working with the Shoals Marine Laboratory in Maine to run five months of ocean deployment and testing for the generator. Shoals is run jointly by Cornell and the University of New Hampshire.

Anzani runs an angel investing firm, Smartup Capital, LLC, which is WavElectric’s initial investor. The company is also working with the Clean Tech Center incubator at the Tech Garden in downtown Syracuse.

WavElectric (www.wavelectric.com) is seeking additional investment now, says Anzani, who received his master’s degree in business administration at Cornell. The firm’s first systems for recharging monitoring devices should be on the market by next summer.

Martinez began developing the system while volunteering in a coastal community in Mexico, Anzani says. The area lacked access to the electric grid so Martinez began working on a way to provide power for the community using the ocean.