How can you watch the Syracuse basketball game vs. Niagara? (TV, time, streaming details & game preview) 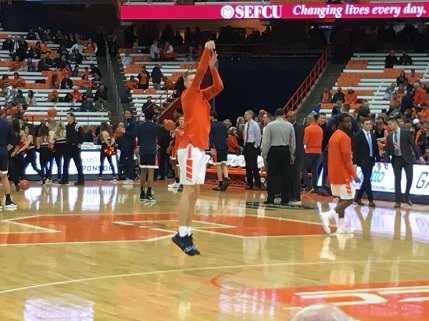 SYRACUSE, N.Y. — Syracuse basketball (7-5) looks for a third consecutive win to close out its nonconference schedule when the Orange host the Niagara Purple Eagles (2-8) on Saturday night.

The game tips off just after 7 p.m. at the Carrier Dome and will be shown on ACC Network Extra, a streaming-only service that is offered exclusively through the ESPN app. Subscribers to cable, satellite, and streaming services such as AT&T U-verse, DirecTV, Dish, Hulu, Spectrum, Verizon FIOS, and YouTube TV have access to the ESPN app.

Syracuse, currently ranked 57th in the KenPom Ratings, is coming off a pair of 12-point wins over mid-major, nonconference opponents in its last two games (Oakland and North Florida, respectively.) In its most-recent contest — on Sat., Dec. 21 — Syracuse withstood a barrage of 17 made three-point field goals in 46 attempts by North Florida. The Orange had five players score in double figures to help secure the 82-70 victory over the Ospreys.

Niagara’s most recent game was also last Saturday, a 92-72 loss at Buffalo. The Purple Eagles, members of the Metro Atlantic Athletic Conference, have posted three straight losses — all to upstate New York teams. Niagara is ranked No. 312 in the KenPom Ratings, out of 353 Division I basketball teams.

Syracuse–area native Greg Paulus, a former football player at Syracuse and basketball player at Duke, is Niagara’s head coach. Paulus took over for Patrick Beilein, who stepped down as head coach in late October, for personal reasons, before he had coached a single game. Beilein had been Le Moyne’s head coach for the prior four seasons before accepting the Niagara job.