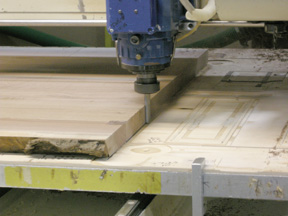 McCONNELLSVILLE — Harden Furniture recently landed a $600,000 New York State Economic Development Council grant that will help the company kick off a three-year, $6-million technology upgrade that expands upon technology innovations installed at the company’s McConnellsville furniture factory a year ago.

Last November, Harden (www.harden.com) installed a new Holz-Her CNC machining center and replaced a rough mill with a Weinig optimizing system. The new manufacturing technology was the first step in moving Harden from a batch manufacturer to a Batch One manufacturer, where pieces are quickly and efficiently produced one at a time as needed, Gregory Harden, president and CEO says.

In this next phase, Harden Furniture will improve its rough mill with new woodworking equipment, expand, upgrade its sawmill, and improve its IT system.

While it’s taken the better part of the past year to fully integrate the machining center and get it programmed, Harden says he’s more than pleased with the machine and the changes it has already brought to the company.

At a time when many domestic furniture manufacturers are struggling, Harden Furniture is holding its own with steady sales and potential for growth, Harden contends. Furniture Brands International, Inc. of St. Louis — which owns the Broyhill, Lane, Drexel Heritage, and Thomasville brands — filed for Chapter 11 bankruptcy in September and plans to sell all of its lines, except Lane, to an asset-management firm. Many other furniture manufacturers have also faced financial troubles in recent years as the tepid economy and foreign competitors continue to batter the industry, Harden says.

However, new technology is giving Harden Furniture new sales and growth avenues that Harden is confident will help the company prosper. Along with freeing the company up from storing nearly finished pieces and components in inventory until sold, the new equipment helps Harden to offer custom furniture pieces such as a live-edge table. That option, while offered before, was labor intensive and costly. Now, Harden notes, it’s no more work to make a customized piece than a standard one. All the company needs are specs from the customer and a quick reset of the CNC machine.

Already, about 10 percent of Harden Furniture’s production is customized products, with anywhere from 30 to 40 percent of business in the company’s contract division moving to customized. Harden expects those figures to continue growing as word gets out.

“There’s really nobody in this country doing what we do,” he says. Competitors such as L. & J.G. Stickley, based in Manlius, provide an excellent product, but still utilize a batch process that makes customization difficult, Harden contends.

And customization seems to be where the industry is going. Harden Furniture’s ability to offer that customization quickly and at a reasonable price is already paying off with sales that are up for the year, Harden notes. He declined to provide specific revenue figures for the company. The 2013 Business Journal 500 publication pegged Harden Furniture’s most recent fiscal-year revenue at nearly $20.6 million, citing Hoovers data. The company has nearly 300 employees.

“As people look at us and see we’re being innovative and investing in the company, that really helps us from a business standpoint,” Harden says. He expects the technology upgrade project to wrap up in early 2015.

Headquartered in McConnellsville, Harden Furniture is family-owned business that was founded in 1844. The company says it’s currently the oldest furniture manufacturer in North America.

Harden Furniture says it gets most of its hardwoods, such as black cherry and maple, from trees grown within a 50-mile radius of its McConnellsville plant. It owns and manages its own forests.