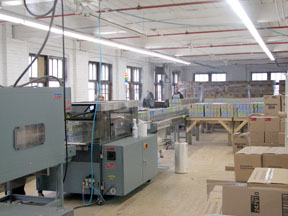 HERKIMER — The old industrial building that the Herkimer Area Resource Center (HARC) acquired in the fall of 2009 has come a long way since then.

Now, with fresh paint, new windows, and a host of other improvements, the building is ready for any potential tenants looking to lease office, industrial, or warehouse space in the HARC Business Park.

“It’s been a lot of different things,” HARC President and CEO Kevin Crosley says of the building, which has been home to LaSalle Laboratories and a Furniture Weekend store in more recent years and a women’s garment manufacturer years ago. “Our goal is to turn it into a real community asset.”

HARC will do that, he says, by leasing out space in the 120,000-square-foot, three-story building located on the corner of East German Street and Route 28.

The building is already home to the Herkimer County Chamber of Commerce, which moved in last November as the anchor tenant. HARC also leases industrial and warehouse space to several companies including Albany International Corp., TimBar Packaging & Display, and Fiberdyne Labs, Inc. In addition, HARC uses some of the industrial space to perform contract work for several of its tenants, including Albany International and TimBar Packaging.

Those partnerships work out well, Crosley says, because HARC gets paid to perform the contract work and is paid for the leased space.

But it’s a big building, with plenty more room available, he notes.

HARC has invested more than $1 million in the building to install new windows on the first floor, paint all three floors, install subflooring, install a new elevator, pave an 80-space parking lot, and install new doors to make the building ready for tenants. Some of the work was funded through grants from The Community Foundation of Herkimer and Oneida Counties and the New York State Energy Research and Development Authority provided funding through grants and incentives for some of the work, including the elevator and the new lighting.

The Herkimer Chamber leases just over 2,000 square feet on the first floor, where there is a conference room that tenants can share. About 8,000 square feet is dedicated “incubator” space where HARC can either rent the whole space or partition it and build out offices to suit small tenants who just need a one- or two-room office.

The second and third floors are primarily industrial and warehouse space, complete with a freight elevator and three loading docks.

The goal, Crosley says, is to provide businesses with usable space in a historic building, while also diversifying the revenue stream of HARC, a nonprofit agency that provides services and employment opportunities to the disabled.

This year, the agency is struggling against a $1 million cut in funding, which it receives from the state through Medicaid. The agency has had to absorb that 6 percent loss into its $23 million budget for this year, Crosley says. Rather than generate extra revenue, which it could then re-invest in the agency, HARC will likely just break even this year, he says. The agency employs more than 400 people and has not had to lay anyone off in spite of the funding cuts.

That’s why developing a revenue stream from other sources is so important, Crosley says. HARC has already made some strides in that area, launching a Goodwill store several years ago and acquiring Advanced Technologies, a safety-equipment supplier, last August. Becoming a landlord is just another way to further diversify where the agency’s money comes from, Crosley says.

As the first tenant, the Herkimer Chamber has had nothing but positive experiences in its new home, Executive Director John Scarano says.

“It gives us a more professional presence,” he says of the space, and the attention the chamber has received since moving to the building has helped the organization grow its membership.

Built in 1898, the HARC Business Park facility is located on five acres in the village of Herkimer.