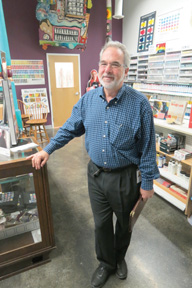 NEW BERLIN — Golden Artist Colors, Inc. is committed to producing artistic paint materials that encourage exploration of form and concept. “We have the most creative customers in the world,” says Mark Golden, the chairman and CEO of Golden Artist Colors. The company, founded in 1980, is the largest domestic producer of acrylic artist paints.

“Our customers are artists, who are constantly experimenting with different media … My father Sam, who started making paint in 1936 (at the age of 21) with his uncle Leonard Bocour [on 15th Street in Manhattan], was eager to offer custom paint made to an artist’s specifications … ‘We’ll make whatever you want,’ was his usual response … Today, Golden Artist Colors produces 3,000 different products [excluding custom products], many derived from an artists’ requests,” notes Golden.

Golden, along with his wife Barbara, joined his father Sam who came out of retirement and his mother Adele in forming the company. The original four employees now number 148, of whom all but four reside in Central New York. Annual revenue has grown from $35,000 in 1980 to $22 million today. The original 900-square-foot barn that housed the operation is now a 100,000-square-foot manufacturing facility. By the third quarter of this year, Golden Artist Colors expects to open a 45,000 square-foot, refurbished building in Norwich designed to increase the company’s warehousing and distribution capacity and to free up more manufacturing space in New Berlin. The Norwich project is estimated to cost $2.5 million. “The Community Development Block Grant Program, [which supports the Norwich investment], require[s Golden Artist] to retain 157 employees and create 37 new jobs over … [five] years,” adds Jodi L. O’Dell, the company’s communications coordinator.

“Golden Artist Colors currently exports 25 percent of our products to 55 countries around the world,” notes Golden. “Distribution is different in each country, and we have to be sensitive [to the distinctions] … It’s important to find the right strategic partners as we grow in a global marketplace.”

Golden’s strategy for sustainable growth is evident in his choice of two recent additions to the management team. “In 2009, the company hired Jim Henderson as the corporate controller, promoting him in 2012 to chief financial officer. He brought years of experience with Benjamin Moore (a paint manufacturer with $1 billion in sales) … Jim is invaluable in helping us with the strategic and global financial-planning process,” says Golden. “Last year, we hired Scott Weller as our director of marketing … He has 20 years of experience with Unilever and H.J. Heinz, where he was instrumental in growing sales and developing innovative ideas,” continues Golden.

Rounding out the management team is Barbara J. Schindler, president; William Berthel, human-resources manager; William Hartman, director of sales; Greg Sheldon, director of operations; Howard Thaller, director of paintwork; and Barbara Golden, a company co-founder and executive director of the Sam & Adele Golden Foundation for the Arts. Golden, his wife Barbara, Henderson, and Barbara Schindler comprise the board of the operating company.

Being passionate about its products separates the company from the competition. “We encourage the [entire] staff to be passionate by listening to our customers … Last year, we responded to 13,000 emails and voice-mails, talking directly to our customers … We focus on innovation, devoting 4,000 feet to our R&D lab, which houses 15 people working on new products, quality assurance, and technical support. The company uses the stage-gate process (a multi-stage process to determine the most important ideas) to manage new-product innovation. We always have 400 ideas we’re considering, looking for the big, new idea to bring to market,” says Golden.

“Education [both of our employees and customers] is another critical [tool] in letting us compete successfully,” avers Golden. “[For example,] … the company sponsors ‘paint day’ for the employees to provide the people who make the paint the experience of painting. The company also certifies working artists who have extensive acrylic-product training to conduct demonstrations and staff trainings for artists. These workshops are conducted in most metropolitan areas in the U.S. and Canada as well as locations in Europe and Asia. [In addition,] … we have a program for professional art educators. These four-day sessions are focused on acrylic techniques.

“Perhaps the most important reason for our success is that we create an environment where our people can thrive. If our people thrive, the company will too. We want to be a leader in employee growth,” says Golden. “The company established a profit-sharing plan back in 1987, the first year we [generated] profit … Three months after Enron imploded in 2002, we became an ESOP (employee stock-option plan). Today, the employees own 62 percent of the stock, and the Golden family owns the remainder. Golden Artist Colors set up a four-percent [corporate] matching 401(k) program to encourage saving, [with the proviso] these funds couldn’t be used to buy Golden Artist Colors stock. The lesson of Enron was the need for diversification of investments … We encourage continuing education by paying for courses and offer flex-time to accommodate the employees’ schedules.”

One measure of the company’s success in attracting and retaining employees is longevity. “Seven of the employees (plus Golden and his wife) have been with us for more than 25 years, and half for more than 10 years,” avers Golden.

“The company also has a commitment to the community,” adds Golden. “We give all the employees 40 hours of paid time annually for volunteer work in the community. If the employee is an EMT (emergency-medical technician) or a firefighter, we pay for two weeks of volunteer time … The Golden family set up the Sam & Adele Golden Foundation for the Arts (1997, the year of Sam Golden’s passing) here on the property (140 acres) to support the arts community. (The 2011 form-990 filing of the foundation shows $1,974,689 as the fair-market value of all assets.)

Last year, the Foundation opened a residency program for professional artists working in paint. We transformed a 19th-century barn into large studio spaces with private apartments … The artists have an opportunity to explore an innovative range of materials and technology … We hope this will open up new methods of expression and enhance the creative process. The Foundation offers financial support and supplies paint materials and technical support,” Golden says.

Golden Artist Colors has relied almost entirely on organic growth to sustain its upward sales trajectory. In May 2010, the company made its only acquisition, purchasing the assets of the Williamsburg Handmade Oil Colors company.

“The founder of Williamsburg (Carl Plansky, who died in 2009) trained his paint makers to make paints like artists. He was a craftsman who developed a following. [Plansky] moved the company from Brooklyn to Oneonta, just 25 miles away … We [later] moved the company’s five employees and operations to [New Berlin],” says Golden. This now gives our sales representatives the opportunity to sell both oil and acrylic paints … at a time when the number of art stores is declining.”

Golden has no illusions about competing in the global marketplace. “We’re [certainly] not the biggest player in the marketplace. We face competition from giant companies like ColArt and the Becker Group… ColArt has established brand names like Winsor & Newton, Lefranc & Bourgeois, Liquitex, and Reeves … Where we sell in 55 countries, ColArt sells in 120.

ColArt has operations in 16 countries and had sales of $230 million in 2011. ColArt and Becker are both owned by the Linden Group of Sweden.

Golden Artist Colors works with NBT Bank, headquartered in Norwich, for its financing and Carol Ronovech, CPA P.C. of Oneonta for its accounting. Because the corporation’s legal requirements are so specialized, Golden Artist Colors retains different law firms for trademarks, the ESOP, and compliance.

Despite threats to the business such as competitors with lower prices and the consolidation of retailers, the future of Golden Artist Colors is bright as it continues its pattern of growth. Sam Golden’s legacy of passion for the customer, innovation, and producing quality products lives on not just in the second generation but in the company staff.