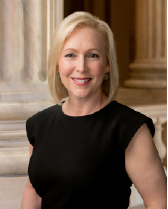 SYRACUSE — U.S. Senator Kirsten Gillibrand (D–N.Y.) on Oct. 9 stopped in Syracuse to discuss a proposal to “streamline the process” for obtaining U.S. Department of Veterans Affairs (VA) benefits for burn pit and other “toxic exposures.”

The proposed legislation is called the “Presumptive Benefits for War Fighters Exposed to Burn Pits and Other Toxins Act of 2020.”

The Democrat senator had first announced the bill on Sept. 15 outside the U.S. Capitol in Washington, D.C. Gillibrand is a ranking member of the Senate Armed Services Personnel Committee.

About 3.5 million veterans have been exposed to burn pits that spewed toxic fumes and carcinogens into the air, according to Gillibrand. Yet, despite the known health consequences of burn pit and other toxic exposures, the VA “continues to deny” burn pit-related disability claims for nearly eight in 10 veterans.

The VA website includes a page on burn pits and offers this explanation: “At this time, research does not show evidence of long-term health problems from exposure to burn pits. VA continues to study the health of deployed veterans.”

It goes on to note that the National Academies of Sciences, Engineering, and Medicine (NASEM) released the consensus report titled “Respiratory Health Effects of Airborne Hazards Exposures in the Southwest Asia Theater of Military Operations” on Sept. 11 of this year.

The VA is currently reviewing this report, according to the website.

“For decades, we’ve watched our 9/11 first responders and Vietnam veterans suffer from deadly ailments due to toxic exposure. Now, as veterans come home from Iraq and Afghanistan, they are suffering from the same cancers, lung diseases, and respiratory illnesses and the VA is leaving them out in the cold,” Gillibrand said in a news release. “Congress cannot sit by as the VA fails to help those who served our country. Veterans should not be forced to beg for coverage — if they were exposed and they are sick, they need health care — period. This legislation will make that a reality and I will fight to make it law.”

What the proposal would do

As Gillibrand’s office explains it, under current law, a veteran who has an illness or disability must establish a direct-service connection in order to be eligible for VA benefits.

Direct-service connections means that evidence establishes that a particular injury or disease resulting in a disability was incurred while in service in the armed forces.

For veterans exposed to burn pits, this means they would need to provide medical evidence of a current disease or disability, offer evidence of in-service physical presence near a specific burn pit or exposure to specific toxins or substance, and provide evidence of a link between the disability or illness and that exposure.

Upon completion of these steps, the VA determines if there is enough evidence to provide a medical exam and continue with the disability-compensation claim.

It is currently the veteran’s responsibility” to prove his/her illness or disability is directly connected to burn-pit exposure.

The Presumptive Benefits for War Fighters Exposed to Burn Pits and Other Toxins Act of 2020 would remove the “burden of proof” from the veterans to provide enough evidence to establish a direct-service connection between their health condition and exposure.

The veteran would only need to submit evidence of deployment to one of the 34 countries named in the bill or receipt of a service-medal associated with the Global War on Terror or the Gulf War.

“Clear Path for Veterans adamantly supports the crucial efforts taken by Senator Gillibrand to recognize the detrimental effects of burn pit and toxic exposure servicemen and servicewomen have been subjected to,” Behm said. “This legislation aims to fulfill our duty as a Nation to care for those who have been put in harm’s way while serving in the United States armed forces.”

Clear Path for Veterans is a 501(c)(3) nonprofit organization, that says it is upstate New York’s “archetype veteran service organization serving as a hub of information, programs, and resources.”