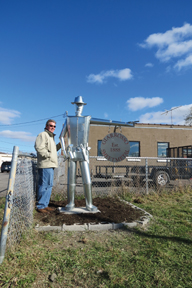 SYRACUSE  —  One man working for Giarrosso Sheetmetal, Inc. spends all day in one spot. Yet the company hopes it can follow him down a road of expansion.

The man isn’t a traditional employee. In fact, he’s made out of metal — he’s a tin man standing in front of Giarrosso Sheetmetal’s home at 120 Ball Circle in Syracuse.

Giarrosso Sheetmetal built the tin man over the winter and placed him in front of its headquarters at the end of February. His construction was part of an effort to make the business more visible, according to its co-owner, Andrew Shaffer.

“We’re set back from the road,” Shaffer says. “We needed something more to stand out — a landmark. And it’s fun.”

The tin man’s assembly coincides with a push to expand the sheet-metal fabrication company’s sales. Shaffer wants to market the company’s services to contractors in the Syracuse area.

Giarrosso, founded in  1888,  specializes in fabricating ductwork for heating and air-conditioning systems. It can also create a variety of metal products, from copper sinks to metal roofing.

“More established, older businesses are familiar with the name Giarrosso,” Shaffer says. “We are now trying to reenergize that business.”

Giarrosso’s business had slowed before Andrew Shaffer and his brother, Patrick Shaffer, purchased the company in 2006, Andrew Shaffer says. Giarrosso’s owner and sole employee at the time, Joseph Spano, was preparing to retire, he adds.

Andrew Shaffer and Patrick Shaffer own another company, Shaffer Building Services, Inc., which is an industrial-contracting firm. Shaffer Building Services was Giarrosso’s primary client when the brothers purchased the sheet-metal fabrication company, according to Andrew Shaffer. He declined to discuss the terms of the purchase or disclose Giarrosso’s revenue totals.

However, Andrew Shaffer has set a goal of growing Giarrosso’s revenue by 20 percent to 30 percent in 2012. He declined to share the company’s revenue growth from previous years.

That growth could spark hiring, he says. Not counting its tin man, the sheet-metal fabricator currently has two full-time employees and a part-time worker, as well as a front-office staff member it shares with Shaffer Building Services.

The exact timeline for hiring workers and the number of employees to be added will be determined by the rate of Giarrosso’s growth, Andrew Shaffer says. The company will be willing to bring on experienced employees as well as workers who need training, he says.

Andrew Shaffer’s strategy for growing the sheet-metal business goes beyond reaching out to contractors that may already be familiar with Giarrosso. He also plans to cold-call new contractors who may not have worked with the company before, he says.

“We have a large variety of people that come in here, because we make specialty things,” he says. “If you need it today, we can pretty much get it for you today. If not, we can get it for you first thing tomorrow.”

Andrew Shaffer plans to focus on the Central New York market. He has no intention of expanding to other regions of the state.

Giarrosso takes up 2,200 square feet of a 10,000-square-foot building at 120 Ball Circle. Shaffer Building Services is headquartered in the remainder of the building, which Andrew Shaffer and Patrick Shaffer own.

Shaffer Building Services specializes in commercial roofing work, Andrew Shaffer says. The company generated $3 million in revenue in 2011, and Andrew Shaffer projects revenue to increase by 10 percent in 2012. The firm is experiencing strong growth at the moment and may even hit 20-percent growth this year, he says.

The building company employs 20 people full time and is currently in the process of hiring an estimator, Andrew Shaffer says. It may hire an additional estimator as well, he adds.

Neither Shaffer Building Services nor Giarrosso Sheetmetal is likely to be adding any more tin men in the future. Andrew Shaffer thinks that the one Giarrosso has showcases the firm’s abilities. Its parts demonstrate the company’s craftsmanship, he says.

“None of the pieces are off the shelf,” he says. “They’re all custom-made. Special bends, tapers, special seaming.”