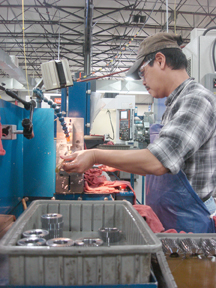 SOLVAY  —  Gear Motions Inc. intends to rev up its rate of growth after the custom-cut gear and ground-gear supplier expanded its customer base by acquiring Buffalo–based Pro-Gear Co. Inc.

“We’re seeing a lot of export opportunities,” says Dean Burrows, vice president of Gear Motions and president of its Nixon Gear subsidiary. “A lot is falling into our sectors, which is providing us with a lot of opportunity.”

“[Pro-Gear] gives us a new group of customers to work with,” Burrows says. “Acquiring them allows us the opportunity to go to a Mack Truck[s] and be able to provide them full turnkey manufacturing all the way from raw material to gear grinding.”

Gear Motions purchased Pro-Gear in an asset sale that included Pro-Gear’s manufacturing equipment but involved no outside brokers or accountants, Burrows says. However, Gear Motions did not buy Pro-Gear’s former facility, which was owned by Pro-Gear founder and President Gary Rackley.

Gear Motions will continue to market and brand products under the Pro-Gear name for the time being, according to Burrows. Rackley is staying with the company and will retain his role as Pro-Gear president, he says.

“He’ll be involved for the next couple of years,” Burrows says. “Gary is getting toward retirement, and this is a nice transition for him to keep the business moving forward with a very solid and stable company.”

Gear Motions and Pro-Gear are a good fit for each other, Rackley said in a news release.

“This is a great merger of Gear Motions’ state-of-the-art gear-grinding technology with Pro-Gear’s proven ability to turn around its customers’ ground gear needs in a hurry,” Rackley said.

Gear Motions is also upgrading its Oliver Gear facility in Buffalo with about $750,000 in capital investments, Burrows says. The investments, which are in addition to equipment brought in from the Pro-Gear acquisition, include a new gear grinder for the facility. Gear Motions is paying for those upgrades with cash reserves.

But he says Oliver Gear and Nixon Gear generated $12.9 million in combined revenue in 2011. Gear Motions is seeking to grow revenue to $20 million in 2012.

The company also wants to grow to 100 employees. It currently has just over 75 workers, and its employment levels have increased 23 percent from the start of 2011.

“We have a relatively strong growth strategy right now through acquisitions and organically,” Burrows says. “We anticipate doing another acquisition this year, and our plan is to do at least one acquisition a year for the foreseeable future.”

Burrows declined to name the company Gear Motions plans to acquire this year.

Gear Motions is in the process of finalizing $500,000 in capital investments at its 45,000-square-foot Nixon Gear facility at 1750 Milton Ave. in Solvay, he says.

The capital investments will go toward new equipment, according to Burrows. Financing will come from First Niagara Bank.

Gear Motions also recently entered into a joint-venture agreement with Solvay–based engineering-consulting firm KBE+, Inc. The venture, which the companies agreed to in the fall of 2011, outlines plans for KBE+ to become a subsidiary of Gear Motions in a year or two.

KBE+ is headquartered in 4,400 square feet of space it leases at 2555 Milton Ave. The company employs 10 people, according to company founder and President William Mark McVea.

“This new agreement grew out of a general growth in business as well as a mentality on both companies’ parts,” says McVea. He declined to disclose revenue totals but says KBE+ is targeting revenue growth of 10 percent to 12 percent in 2012.

“Gear Motions has some of the best equipment in at least Central New York if not the East Coast,” he says. “I have clients out on the West Coast that come here for my expertise. The bigger the suite of services and expertise you can offer a client, the more likely you are to attract a clientele.”

Gear Motions and KBE+ have worked together for about five years, Burrows says. The companies are approaching an acquisition slowly because it represents a new field for Gear Motions, he adds.

“In our traditional business model, up until now, what we receive is a print from our customer and we make to that print,” Burrows says. “If a customer came to us with a clean slate saying, ‘Please design this for us,’ we haven’t had that capability. But now we do.”

Changes at Gear Motions aren’t limited to acquisitions and expansions. The company is currently working with ad agency Pinckney Hugo Group in Syracuse on a rebranding campaign.

The campaign is in its early stages but could be ready to launch in three to four months, Burrows says.