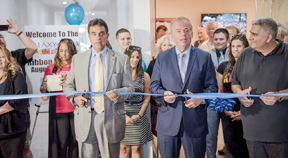 UTICA — The top executive at Galaxy Communications has wanted to move his Utica operation’s headquarters “for a number of years” and now has done just that.

The radio broadcaster on Aug. 21 formally opened its new, 5,000-square-foot headquarters in the renovated Landmarc Building in downtown Utica.

The company’s Utica office was previously located in a smaller space at 39 Kellogg Road in New Hartford and had operated there since 1994, says Edward (Ed) Levine, CEO of Galaxy Communications.

The Kellogg Road space, that Galaxy still owns, “was very good to us,” Levine adds.

Syracuse–based Galaxy Communications operates radio stations in both the Utica and Syracuse markets. It also has divisions that focus on events and sports marketing.

His firm will be rebranding to Galaxy Media in the near future, Levine notes.

In the last two decades, Levine believes Galaxy has evolved into a “pretty successful company” and he wanted an office space “that represented that.”

“It is also more conducive to doing business. We think it will attract more employees and give the current employees a better work atmosphere,” he says.

“It is one of the true landmarks of downtown Utica,” says Levine.

The structure is known locally as a building that’s previously been home to banks such as HSBC and had “fallen into disrepair” over the past 15 years, says Levine.

Michael Pezzolanella and his son, Francis, two developers, bought and renovated the building.

When asked about the cost to make the move, Levine says it was “more than we thought initially but less than it would [cost] in any other city in America.”

Galaxy used its own assets to finance the move, according to Levine.

Besides its first-floor studios, Galaxy has also signed a lease for an apartment in the building in case any of its employees would need to spend the night for an

early-morning shift or due to difficult driving conditions in the winter.

To mark the occasion of its formal opening, Galaxy hosted a “Friday After Four” event on the afternoon of Aug. 21 outside the Landmarc Building, according to a

Galaxy started in the back of a diner in Frankfort in Herkimer County 25 years ago before moving to Washington Mills in 1994, according to the news release from Palmieri’s office.

Washington Mills is located in the town of New Hartford.

Studios of the Galaxy radio stations are operating on the first floor, facing the street, says Levine.

“It’s a similar motif to what we did in Syracuse in Armory Square,” he adds.

Galaxy’s Syracuse headquarters is located at 235 Walton St. in Syracuse.

Galaxy employs 20 people in Utica and between 60 and 80 employees companywide, between the Utica and Syracuse locations.