Frito-Lay: Do us a flavor 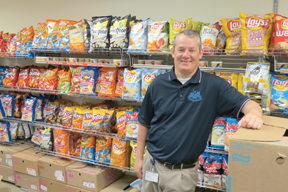 KIRKWOOD — And the winner of “Do Us a Flavor” is — Karen Weber-Mendham of Land O’ Lakes, Wis. The date: May 6. The location: Eva Longoria’s upscale Beso Restaurant in Hollywood.

Representatives of Frito-Lay announce that Weber-Mendham is the recipient of either $1 million or 1 percent of the 2013 net sales of her award-winning suggestion for “Cheesy Garlic Bread,” whichever is larger. The other two finalists, who submitted “Chicken and Waffles” and “Sriracha” (a hot sauce from Eastern Thailand), each receives $50,000.

Frito-Lay garnered nearly 4 million submissions through social media from American consumers for the contest. A panel of judges picked the three finalists whose recipes were developed by the company and the new products were placed on store shelves last February. Earlier this year, more than 1 million consumers cast ballots by texting or via Twitter or Facebook to determine the winner.

“This is one way the world’s number-one snack and food brand is listening to its customers,” says Mitchell T. Hamilton, director of manufacturing at Frito-Lay North America’s plant located at 10 Spud Lane in Kirkwood, just a few miles from downtown Binghamton. Listening to its customers yielded Frito-Lay $13.574 billion in revenue last year and an operating profit before-taxes of $3.646 billion (26.9 percent profit margin). Of the 48,000 employees companywide, the “Kirkwood plant employs 530 — 330 in manufacturing, 100 in traffic, and 100 in the warehouse,” notes Hamilton.

“The plant opened in November 1974 with 130,000 square feet and about 120 employees. In 1978, we added a warehouse with 65,000 feet and another 46,000 feet in the 1990s,” continues Hamilton. “The plant now [covers] close to 250,000 square feet and is [sited] on 43 acres (The company owns the site and building.) … [Our facility] has eight production lines going three shifts a day, seven days a week, and produces more than 100 million pounds of finished product annually, which includes Lay’s Potato Chips (regular, salt and vinegar, BBQ, sour cream and onion, cheddar), Ruffles, Lay’s Wavy, Fritos, Doritos, Tostitos, and Santitas.

“Kirkwood is a highly automated operation,” says Hamilton. “Frito-Lay takes in 2 million pounds of potatoes every week … We unload the trailers at one end of the plant, wash and peel them; slice them according to the product; and fry, flavor, and package them for storage and shipment at the other end … Sourcing relies on just-in-time inventory deliveries … The plant also processes about 52 million pounds of corn annually … We have 30 maintenance people on staff to ensure our production schedules and 35 tractors and 200 trailers for delivery to our customers, which are located primarily in Upstate and in New England.” Kirkwood inventories 228 different stock-keeping units.

“We buy potatoes from all over the country, although 50 percent of our supply comes from [the province of] Ontario,” adds Hamilton. From the time the crop arrives, we turn it into potato chips within a day and a half. Our corn supply comes by rail from Sydney, Ill., and our corn oil comes in by truck … The purchasing is done from [corporate headquarters] in Plano, Texas … Binghamton is well-located to serve our customers, who are mostly distributors and a few, large, retail customers [to whom] we sell direct. The site’s drivers average about 425 miles a day [round-trip].”

Frito-Lay, a division of PepsiCo, Inc., has been focusing its attention since 2007 on the changing global, consumer environment. That was the year Indra K. Nooyi was appointed chairman and CEO of PepsiCo. Her letter in the 2012 PepsiCo corporate annual report noted continuing consumer shifts. In 2006, emerging markets represented 24 percent of the parent company’s net revenue. At year-end 2012, it was 35 percent. And while consumption is shifting more to Asia, American tastes are also changing, along with a concern for food safety and a heightened environmental consciousness.

“We have eliminated trans-fats from our snack chip, as well as reduced the amount of sodium in many products,” says Hamilton. “We also offer baked products as an option to frying … and introduced multi-grains and whole grains.” In addition to the country’s concern for healthful foods, Christopher T. Kuechenmeister, the senior director of public relations for Frito-Lay, notes America’s changing tastes. “Americans now prefer more flavorful [products] … [foods that are] more robust. There is a move to more ethnic foods and a more international [cuisine].”

Quality control is a major focus at Kirkwood. “Customers are very sensitive to the taste and freshness of our products,” avers Hamilton. “Analytics don’t tell us everything … We check the raw materials when they are received and each line tastes the product twice each shift while it is being produced. And it’s not just one person; we have a team that rates the product against a benchmark … We offer sensory training on-site and assign three to five members to each tasting team … We also lay a nitrogen barrier into some products to ensure the freshness once the chips are in the package.”

The plant is a model of energy-efficiency and recycling. “Kirkwood buys its electricity off the grid from NYSEG (New York State Electric & Gas). We have multiple ovens running at 350 to 400 degrees (Fahrenheit), and we recover much of that energy to make steam … Of all the waste we produce, less than 1 percent ends up in a landfill … [For example], we collect the starch from our potatoes and bag it for resale. Each truck we fill generates $7,000 [to the company], and the starch is turned into glue for commercial purposes. In the decade from 2000 to 2010, Kirkwood reduced its consumption of BTUs by 31 percent (natural gas), our water consumption declined 63 percent, and electricity usage fell (BTU/lb.) by 29 percent.”

Hamilton is a 28-year veteran at Frito-Lay, with a background evenly split between manufacturing and service/distribution. Born in Kentucky, he started with the company in 1985 and has worked at five different sites. A graduate of the University of North Carolina, Hamilton was an hourly worker at Frito-Lay while earning his degree. In addition to Hamilton, the leadership team at Frito-Lay/Kirkwood includes Jeff Hadwin, senior planning manager; Brian Blackham, human-relations director; Brian Watson, director of logistics, distribution, & traffic; and Tim Polman, director of technology.

PepsiCo, headquartered in Purchase, is the largest food-and-beverage business in the U.S. and the second largest in the world with 2012 annual revenue of $65.5 billion and operating profit before-taxes of $9.1 billion (13.9 percent margin). Net revenues for food and beverage are almost equal. U.S. revenues equal 37 percent of the total and represent 52 percent of companywide profit. Over the last 13 years, PepsiCo shareholder return was $201 on $100 invested; the S&P 500 return was $146.

The company employs more than 300,000 and boasts 19 different product lines that generate more than $1 billion each in annual retail sales. In addition to Frito-Lay, PepsiCo brands include Quaker, Pepsi-Cola, Tropicana, and Gatorade. Its products are distributed in more than 200 countries.

Frito-Lay is the result of a 1961 merger between the Frito Co. and the H. W. Lay Company. In 1965, the new entity merged with Pepsi-Cola to become PepsiCo. Both of the original snack companies were launched in 1932. Frito-Lay brands currently account for 59 percent of the U.S. snack-chip industry.