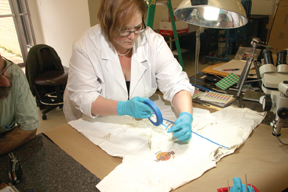 SYRACUSE  — Anita Zannin wanted a different kind of job, so she started her business in blood three years ago.

“I did not want to do the traditional lab all day,” says Zannin, the owner and founder of AZ Forensic Associates, LLC. “I was looking for something else I could do.”

AZ Forensic Associates specializes in bloodstain-pattern analysis. The company analyzes bloodstains scientifically, which can lead to the stains being used as evidence in trials.

The firm’s evaluations have been used in criminal and civil cases, and Zannin is often called to testify as an expert witness when a case goes to trial. She says she works on cases around the country and has also been a part of cases in Canada and Europe.

The number of cases AZ Forensic Associates handles at one time varies based on their complexity. Zannin, who is the company’s only employee, sometimes works on one or two cases at a time but has juggled as many as 12 at once.

Clients typically find AZ Forensic Associates through word of mouth. The business’s reputation is buoyed by the fact that Zannin studied under Herbert Leon MacDonell and became his associate. MacDonell is known as a father of bloodstain-pattern analysis, she says.

Zannin founded AZ Forensic Associates in 2009 and operates the company from a 200-square-foot office in her home. She believes the business will grow strongly in the next eight to 10 months, but declined to share any revenue totals or estimates.

“Being that it’s a new business, it’s still in the startup phase,” she says. “There are a lot of opportunities that seem to be coming in.”

Just 20 percent of AZ Forensic Associates’ cases go to trial, Zannin estimates. The rest are resolved before they go to court through plea bargains or other settlements.

AZ Forensic Associates will work for a range of parties in the legal system, including prosecutors, defense attorneys, and private citizens. Cases do not have to be new for the company to take them on, Zannin says.

“I can get involved at any point in a case,” she says. “It can be a new case that hasn’t gone to the prosecution yet. Or it can be a case that’s old.”

Zannin says she’s worked on cases that are as many as 30 years old. In some situations, she has to examine evidence from photographs and documents. In others, she can visit a crime site to perform evaluations.

“Sometimes the visit is simply for me to get a feel for the physical layout that you don’t get from the photographs and diagrams,” she says. “Other times it’s to see the actual evidence.”

Parties who hire the company should be prepared for the possibility that its evaluation will not back their side in a case, Zannin says.

“After I evaluate it, it’s not necessarily a good result for the person that’s retained me,” she says. “The evidence is the evidence, regardless of who I’m retained by.”

Zannin, an adjunct forensics professor at Syracuse University, is used to teaching. She heads classes for both graduates and undergraduate students at the university, she says.

AZ Forensic Associates, LLC takes on some of her graduate students as interns. The number of interns at the company varies depending on its caseload, but it has had a maximum of three interns in the past, Zannin says. Interns often travel to different states as Zannin looks at crime scenes or testifies.