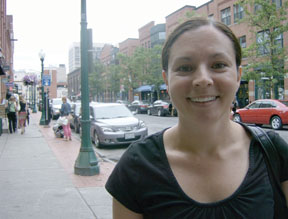 SYRACUSE — While visiting a college friend in Manayunk, Pa., just outside Philadelphia, in June 2012, Kathleen (Kate) Gillen and her pal went on a food tour.

As the day progressed, Gillen later told her friend that she thought Syracuse would be a great place to host such a tour.

“There is nothing like this in Syracuse. We have amazing history, culture, and the food is delicious,” Gillen says.

She did more than ponder the possibility.

Gillen is now the owner and director of operations at Sampling Syracuse Food Tours, a seasonal tour business that she founded last October. She conducted the first tour that same month, and a total of 16 tours as of June 29, she says.

“We have food samples waiting for us at each place. Along the route, we also stop at different historical landmarks [for] a little taste of Syracuse’s history and culture in between eating delicious food,” she adds.

The landmarks include the National Grid (Niagara Mohawk) building, the Jerry Rescue monument, Clinton Square (which was once a main hub of the Erie Canal), and the Landmark Theatre, Gillen comments.

The food tour “definitely was new concept” for many of the restaurants, Gillen says.

“But once I explained exactly what we’d be doing and how I wanted it to be as little of a disruption as possible to the restaurants, they were on board and very supportive of a new local business starting up and bringing people to downtown Syracuse,” she explains.

The samples at each restaurant usually make up the equivalent of “a lunch,” Gillen says.

The tours cost $36 per person.

Gillen operates the business from her home in Syracuse and customers can secure tickets for tours on the business’s website, she says.

As of now, she is its lone employee, but Gillen would like to hire an employee or two at some point in the future.

Prior to launching the tour business, Gillen took a class from Food Tour Pros in Chicago in August 2012.

She had contacted the operators of the food tours in both Manayunk and in Boston for advice on starting such a business. They recommended Food Tour Pros as a starting point.

“I went to Chicago in August and took a two-day class, and it was everything that I needed to know about how to run a successful food-tour business,” she contends.

Food Tour Pros teaches the marketing side of it, how to communicate with the restaurants, and how to price-point the tickets, she adds.

“Because I took the class in Chicago from Food Tour Pros, I was able to have Zerve be my third-party ticket seller because they realized … this small business is serious and they have the proper training, so they’re willing to put themselves on the line in order to help my business,” Gillen says.

Gillen declined to disclose how much it cost to launch the local food-tour business, including the coursework, the website, business insurance, and its logo and business cards.

She also declined to disclose a revenue projection for 2013, saying only that she’d like to have the tour business progress to the point of turning a profit. She’d also eventually like to add a second tour of downtown restaurants.

Gillen is a 1997 graduate of Bishop Ludden High School. She later graduated from the State University of New York at Geneseo in 2001, where she earned a bachelor’s degree in speech-language pathology.

She then earned her master’s degree in speech-language pathology from Syracuse University in 2007.

Besides the seasonal tour business, Gillen also works full time as a speech-language pathologist for an area school district, which she declined to name.