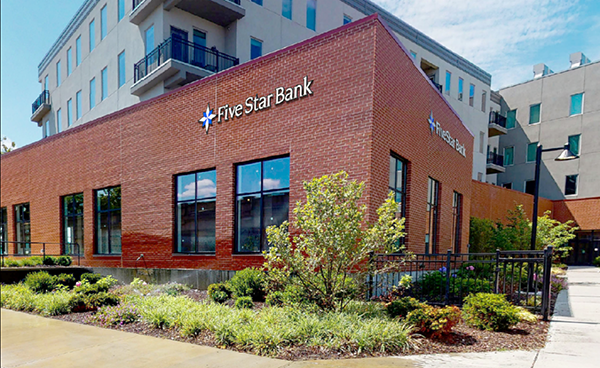 The New York State Department of Financial Services on June 22 granted approval to Five Star Bank to change the location of its branch office at 150 Lake St. in Elmira to 100 West Water St. in Elmira, on or after June 23.

Five Star Bank is a subsidiary of Financial Institutions, Inc. (NASDAQ: FISI), which is headquartered in Warsaw in Wyoming County in Western New York.

“We are very pleased to support the revitalization of downtown Elmira with our move to 100 West Water Street,” Martin Birmingham, president and CEO of Five Star Bank, said in a late April release. “In this new and redesigned branch, our associates will continue to provide the personalized service that customers have come to expect from Five Star Bank as well as advanced digital banking services. We look forward to growing our presence in the Elmira community as we offer education, advice and banking, investment and insurance solutions to help customers improve their financial well-being.”

The branch will be the second to feature Five Star’s new “reimagined” design, including a mix of new technology and community banking with branch staff available, the release stated.

The branch will have an exterior ATM kiosk and vestibule ATM, which will be accessible to customers around the clock. The ATMs will also function as “interactive teller machines,” enabling customers to video-call customer-service representatives to complete basic transactions.

Five Star Bank has more than 45 branches throughout Western and Central New York. Its CNY branches include offices in Auburn, Seneca Falls, Geneva, Ovid, Horseheads, and Elmira. Financial Institutions and its subsidiaries employ about 600 people.