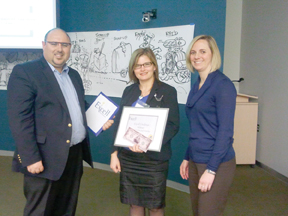 Excell, a state-supported venture fund that invests in early-stage firms, presented the first ever Excell Challenge award to a  team from Syracuse University (SU) at a Pre-Seed Workshop held in Syracuse in March.

The award recognizes the team with the best ability to take a good idea and turn it into a compelling business concept, according to MedTech, a trade association for upstate pharmaceutical, biotech, and medical technology companies. The team from SU won after making a case for its patient-monitoring technology.

The award comes with an optional seed-money contribution up to $10,000 to support the early work of forming a company.

Excell, based in Rochester, was involved in developing the methodology for the Pre-Seed Workshops and helped launch the program in 2004. The workshops have been hosted regularly in Syracuse for several years by MedTech and the Tech Garden in downtown Syracuse.

As of November 2011, 46 workshops had been held, drawing nearly 2,000 participants. The program analyzed 274 ideas from those attendees and helped create or strengthen more than 130 companies, according to the Pre-Seed Workshop New York Consortium.

The money that comes with the new award is enough to help a team take its first steps toward launch, says Rami Katz, Excell chief operating officer. The workshops are focused on teams often involving area universities, he adds.

The inventors involved might be world-class technologists, but need help with forming a company around their ideas, Katz says. That’s why Excell also plans to work with award winners on vetting their ideas, advancing them, and helping them connect with other resources in the region.

“We’re not under the spotlight,” he says. “This will help shine a brighter light on the talent we have in this region. We really think there’s a strong innovation ecosystem in upstate New York.”

Under the award’s terms, the $10,000 is considered a loan provided in the form of convertible debt. Winning companies are also eligible to receive Excell’s early-stage venture funding.

The money is a strategic investment to help young companies tackle their next steps, says Heather Erickson, president of MedTech, which is based in Syracuse. It could go toward prototyping, pay for some early legal work to protect intellectual property, provide for some key technical help, or fund needed consulting work.

“It’s a chance for the founders to dig into the business side and start putting some real plans around [their idea],” Erickson says.

Getting initial momentum, and funding, can be challenging for very young companies, she adds. Many of the teams in Pre-Seed Workshops aren’t even formal companies yet.

They might just have a good idea they’re working on. The new Excell award can help them get over the initial hump, Erickson says.

It will also help them connect with other business-growth services in the area, she adds.