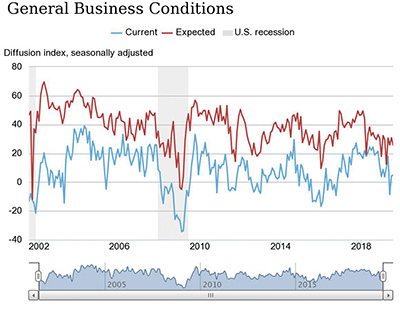 The Empire State Manufacturing Survey general business-conditions index rose half a point to 4.8 in August, pointing to “two months of modest growth” after a brief decline in manufacturing activity in June.

In July, the index jumped 13 points to 4.3 to “climb out of negative territory” after plummeting 26 points to -8.6 in June, representing its “largest monthly decline on record.”

The August reading of 4.8 beat economists’ expectations for an index number of 0.5, according to a Dow Jones survey.

The Federal Reserve Bank of New York said in its Aug. 15 report that the latest results indicate “business activity increased modestly in New York.” A positive index number indicates expansion or growth in manufacturing activity, while a negative reading points to a decline in the sector.

The new-orders index climbed above zero, and at 6.7, indicated that orders increased. Unfilled orders declined for a third consecutive month.

Delivery times were “steady,” and inventories rose for the first time since April. Meanwhile, the shipments index moved slightly higher to 9.3, pointing to an increase in shipments, the New York Fed said.

The index for number of employees held below zero for a third consecutive month, coming in at -1.6, and the average workweek index was at -1.3, pointing to “ongoing sluggishness” in employment levels and hours worked.

The prices-paid index edged down 2 points to 23.2, “suggesting a slightly slower” pace of input-price increases than in July.

The prices-received index was little changed at 4.5, with selling-price increases maintaining a modest pace.

Indexes assessing the six-month outlook suggested that firms were “somewhat less optimistic” about future conditions than they were the prior month.

The capital expenditures index rose 4 points to 23.2, and the technology spending index moved up to 17.4.