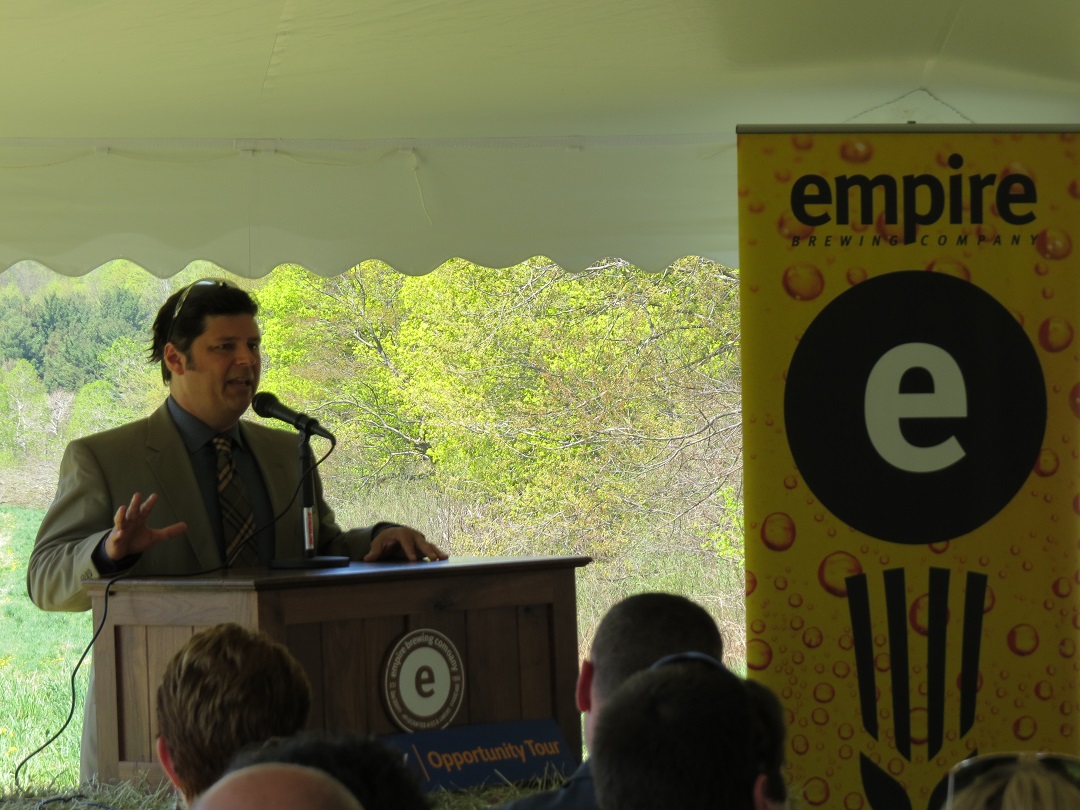 Empire Brewing, headquartered at 120 Walton St. in Syracuse’s Armory Square area, is a brewer of handcrafted ales and lagers.

The company is investing $5.9 million in the Cazenovia project, which will create 52 new jobs, according to a news release about the project from Empire State Development (ESD).

The actual construction work will “hopefully” begin during the week of May 10, David Katleski, president and founder of Empire Brewing Company, said in his remarks to open the Friday ceremony.

“And by the end of this year, we’ll be up and operating and in business,” said Katleski.

When completed, the Farmstead Brewery will be “the largest farm brewery of-its-kind in New York,” ESD said in its news release.

Empire Brewing Company is expanding its operations under the START-UP NY program.

Under the program, businesses sponsored by participating colleges and universities that create net new jobs will operate 100 percent tax-free for 10 years, paying no state income tax, business or corporate state or local taxes, sales tax, property tax, or franchise fees, according to the ESD news release.

Morrisville State College is sponsoring the tax-free area under which the Empire Farmstead Brewery will operate.

Empire Brewing Company is the first START-UP NY company in Central New York to break ground on an expansion project, according to the ESD news release.

“Without the assistance of New York state, I will tell you right now this project would not have happened,” Katleski noted.

Morrisville State College is implementing a new Brewing Studies program. As the brewery’s academic sponsor for START-UP NY, the school will work with Empire Brewing to help manage the facility and educate students on production brewing.

Employees will package the beer manufactured at the brewery in kegs, bottles, and cans for regional and international distribution.

Empire Brewing in 2010 began distributing its beer off-premise to wholesalers and retailers throughout New York state, but has reached its production capacity, according to the ESD news release.

In order to meet “increasing” demand, the business decided to expand its operations with Empire Farmstead Brewery, or “Brewstead,” which will provide both production and educational services.