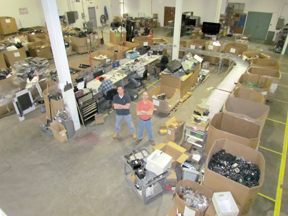 Their business, Coast 2 Coast Electronic Recyclers, Inc., will celebrate Earth Day April 20 by allowing Onondaga County residents to drop off electronic items for free from 8 a.m. to noon at the company’s facility at 6600 Deere Road in DeWitt.

Duffy, president of Coast 2 Coast, says he expects to collect about 100,000 pounds of recyclable electronic products such as televisions, computers, cell phones, and batteries.

While many view those items as disposable, he says, New York state actually requires that they be recycled. Most electronic items contain plastics and metals that can be recycled for other uses. In addition, many also contain harmful items such as mercury or lead that need to be kept out of the landfills, Seymour, the company’s CEO, notes.

Along with diverting lots of electronic items from landfills, Duffy and Seymour hope their Earth Day event also helps raise awareness for Coast 2 Coast, which provides recycling services to businesses as well as consumers.

The pair formed the company last May and began collecting recyclables in mid-August. By the end of the year, Coast 2 Coast had collected about 160,000 pounds of recyclables. “It was quite a stellar end of the year for us,” Seymour says.

As word about Coast 2 Coast continues to spread, Duffy says he expects client numbers to continue growing. In many cases, the company hears from businesses that have been holding on to old electronic equipment because they didn’t know how to dispose of the items. In some cases, he says, businesses didn’t have means to transport the equipment to a recycler. Coast 2 Coast solves that problem for businesses by offering a free pick-up service to businesses.

Coast 2 Coast does charge a fee for the recycling, Seymour says, but makes the bulk of its revenue by breaking down items into about 34 different commodities like plastic and wires, which it then sells to downstream vendors. Some of the vendors that Coast 2 Coast works with include New Jersey–based Metalico, Inc., which operates several facilities in upstate New York; DeWitt–based CNY Resource Recovery, Inc.; and Owego–based Upstate Shredding, LLC.

Employment has also increased at Coast 2 Coast as the company has grown. Duffy and Seymour, who started as a two-man operation, now have a staff of 10 full- and part-time employees, exceeding their goal of adding five employees in 2012. Over the next several years, they hope to grow the work force to 50 employees, starting with between five and seven new employees this year.

Seymour and Duffy declined to share any revenue goals.

In 2012, Coast 2 Coast also successfully completed a project to make “green” improvements at its 20,000-square-foot facility including installing LED lighting and upgrading the production line to pneumatic equipment. The changes reduced the company’s carbon footprint by about 30 percent and boosted its production efficiency, Duffy says.

This year, the company will also work to achieve its Recycling Industry Operating Standard (RIOS) and Responsible Recycling Practices (R2) certifications. The business began work on the certifications last year in hopes of attaining them in 2012, but pending changes to the R2 certification put the process on the back burner, Seymour says. It didn’t make sense to get the certification and then have to possibly apply for it again when new requirements were put in place. Now he plans to achieve those certifications by the end of 2013. Coast 2 Coast is currently registered as an electronic-waste recycling facility with the state Department of Environmental Conservation.

Headquartered on Deere Road in DeWitt, Coast 2 Coast (www.c2ceri.com) also provides data-destruction services and remarkets electronic items that are still in good working condition. The company does not accept appliances for recycling.

Prior to forming Coast 2 Coast, Seymour and Duffy worked together at CXtec in Salina. Seymour was the director of CXtec’s LIFECYCLExpress electronics-recycling division, while Duffy headed a sales division that handled business with the federal government.