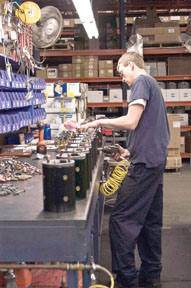 KIRKWOOD — By mid-month, Auburn–based D&W Diesel, Inc. will open its new facility at 27 Link Drive in Kirkwood, ready to tap into the area’s busy trucking, industrial, and natural-gas markets.

The company, which distributes new and remanufactured engine components, tank-truck equipment, industrial products, and hoses, is in the process of finishing renovations on the 7,500-square-foot facility after buying the business, customers, and assets of Fleetsource, which operated at 155 W. Service Highway in Binghamton. Fleetsource is an industry competitor that has locations in New Jersey and Pennsylvania. D&W also purchased a Fleetsource location in Sewell, N.J., says Kristen Marks, marketing-services manager at D&W. She declined to disclose financial terms of the deal.

D&W Diesel has served the Binghamton area from its Auburn headquarters an hour away, she says, but it was time to make a move to better serve the market and position the company for growth in the region.

“We see this new branch as a huge opportunity for us,” she says. Along with enabling the company to better serve existing customers in the area, it also sets the company up to serve the booming natural-gas industry in Pennsylvania and prepares D&W to serve that same role if drilling ever takes off in New York.

In addition, D&W hopes it can tap into the area’s industrial market.

“There are a lot of industrial applications and plants in the Binghamton area,” Marks says. D&W can not only supply parts such as air compressors, hose assemblies, and fittings to those businesses, but also provides energy audits, particularly for companies that use compressed-air systems, and helps companies apply for energy rebates.

The new location, which should open by March 19, if renovations wrap up on schedule, will employ about eight people, Marks says. Three employees are former Fleetsource workers, while the rest are D&W employees who have moved from the Auburn location. Renovation work includes building a customer-service area and just a general sprucing up, such as installing new drywall, Marks says. She did not have estimates for the renovation costs.

The Kirkwood location will offer both counter service and drive-in service and will also have a field-service representative on staff along with a supply of “on-the-shelf” inventory, she says.

The new D&W sites in the Binghamton area and in New Jersey (near the greater Philadelphia area) are not the only growth going on at D&W.

D&W Diesel, which boosted sales by more than 20 percent to top $56 million in 2011, is also enlarging its headquarters in Auburn.

The company already has a 66,000-square-foot production facility, but is adding 55,000 square feet of production, warehouse, and distribution space. D&W is also installing a new warehouse-management computer system as part of the project, which should wrap up in late spring. Marks did not have construction costs for the project available.

D&W, founded in 1976 by brothers Dave and Doug Wayne, employs more than 250 people companywide at locations in Auburn, Binghamton, Buffalo, Rochester, and Albany in New York, along with branches in Cleveland, Ohio; Sewell, N.J.; and Worcester, Mass.

D&W (www.dwdiesel.com) distributes new parts and also remanufactures and sells parts such as engines, starters, alternators, and fuel injectors; sells tank-truck parts such as blowers, vacuum pumps, and hoses; and sells industrial products for industries including food processing, waste-water treatment; and paper and saw mills. The company also sells an extensive line of hoses and fittings along with industrial air compressors and parts.