Downtown Ithaca Race for the Space winners climb to their feet 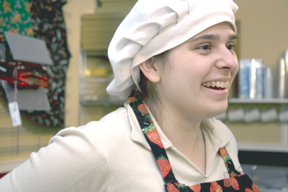 ITHACA  —  The two winners of the Downtown Ithaca Alliance’s “Race for the Space” free-rent business competition wrapped up a four-month sprint to open their stores within the required time frame.

First past the post was The Art and Found, a women’s fashion boutique focusing on sustainable and ethically produced clothing. The store launched at the Center Ithaca building at 171 E. State St. with a soft opening Sept. 1 and held its grand opening Sept. 21.

The two businesses won the Race for the Space competition in June, beating 26 other competitors to win a year of free rent from their landlords as well as legal, marketing, and architectural-design assistance packages put together by the Downtown Ithaca Alliance. In order to accept the awards, the retailers had to agree to sign three-year leases and be open for business within four months of learning they won the competition.

“It was like an episode of ‘Shark Tank’ and an episode of ‘Project Runway’ and then an MBA overnight,” says Heidi Brown, who started The Art and Found along with Olivia Royale after winning the Race for the Space.

“We just worked our butts off and got it done,” Brown says. “It was lots of long days and hard work.”

The Art and Found signed the required three-year lease with Travis Hyde Properties for 1,300 square feet of space. The location required no build-out, according to Brown. It simply needed a coat of paint and some fixtures, which Brown and Royale sourced from local artists.

Brown and Royale used a $15,000 loan obtained through the Ithaca Urban Renewal Agency to get the store ready for its opening. The funding went toward preparing the interior of the store and stocking it, Brown says.

The Art and Found owners hired their first part-time employee on Sept. 26, Brown adds. They’re considering adding a seasonal employee for November and December. Then in the next five years they would like to create an additional full-time position.

Brown declined to share revenue projections or growth estimates for the store, saying only that it has been well received by the public.

“We are just so happy to have the support of the community of Ithaca, the local businesses around us,” she says. “We’re pleased that everybody else is so pleased.”

In contrast to The Art and Found, Life’s So Sweet Chocolates used its Race for the Space win to open its second location, according to the confectionary shop’s owner, Darlynne Overbaugh. She started her company in February 2008 at 27 W. Main St. in Trumansburg. It still occupies that space, where it has a 550-square-foot retail store and a separate 1,000-square-foot manufacturing area.

The Ithaca location combines retail and manufacturing space, Overbaugh says. It is about 1,200 square feet and has some features that she originally wanted in her Trumansburg space but couldn’t include due to logistics.

“We’re going to have seating for people to enjoy our vintage soda fountain,” Overbaugh says. “Part of the reason manufacturing is kept hidden in Trumansburg is the way the space is laid out. We offer tours in the summer months, but in Ithaca we have the advantage of being able to have the manufacturing on display.”

Manufacturing is a kind of theme at 116 W. Green St., which is The Ithaca Journal building. It’s a brick structure, and Life’s So Sweet Chocolates’ space used to be a printing press area, Overbaugh says.

“The landlord, John Guttridge and Urban Core, LLC, they really wanted to embrace the industrial feel,” she says. “It’s a really great testament to how to reimagine the building and reimagine existing buildings.”

Life’s So Sweet Chocolates went beyond the three-year lease mandated by the Race for the Space, signing a five-year lease
instead. The Ithaca location gives the business a chance to connect more closely with college students in the region, according to Overbaugh. Many parents were already having the Trumansburg store ship Life’s So Sweet Chocolates’ goods to their Ithaca–area college students, she says.

Overbaugh hired six workers to staff her Ithaca store. Two of those employees are full time. She also expects to hire two more part-time employees at the shop in the near future.

That’s essentially doubling the size of Life’s So Sweet Chocolates, which has between five and seven employees at its Trumansburg headquarters, depending on the season. Overbaugh also hopes to double revenue in 2012, although she declined to give specific revenue figures.

Retail revenue will hopefully increase by about 25 percent with the new store, Overbaugh says. She also plans on boosting online sales, corporate gifts, and custom gifts to meet her revenue goal. A revamped website and increased visibility from the new shop in Ithaca will help drive up those sales, she adds.

Life’s So Sweet Chocolates had to foot some renovation costs for its Ithaca location, Overbaugh says. The store’s budget for the work was $10,000, which her family helped finance.

Urban Core, LLC was responsible for coordinating some of the work. Life’s So Sweet Chocolates employees also helped ready the store for retail.

“My staff has been painting and hammering and sawing,” Overbaugh says. “They’re pretty excited about it. I think it created a little bit of ownership.”