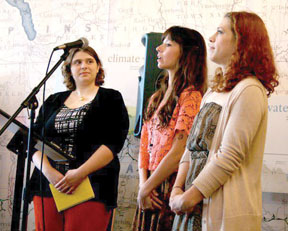 ITHACA  —  A candy shop and clothing store, tabbed as the winners of the Downtown Ithaca Alliance’s “Race for the Space” free-rent competition, will bring missing elements to the city’s downtown, predicts the organization’s executive director.

The Downtown Ithaca Alliance announced the winners of the competition on June 1. The candy store will be a new branch of Life’s So Sweet Chocolates, a business based in Trumansburg that is owned by Darlynne Overbaugh. In Ithaca, Life’s So Sweet Chocolates is heading to a storefront in The Ithaca Journal building on West Green Street, which is owned by Urban Core, LLC.

The clothing shop, owned by Olivia Royale and Heidi Brown, will be dubbed Art and Found. It will be located in the Center Ithaca building at 171 E. State St., which is owned by Travis Hyde Properties.

For winning the competition, both shops will receive free rent for a year, a yearlong advertising package in the Ithaca Timescommunity newspaper, and design services for storefront layout and signage from Ithaca–based John Snyder Architects. The Downtown Ithaca Alliance will also provide graphic-design services, business planning, marketplace assistance, and quarterly monitoring visits from operations experts.

The organization estimates the value of the winners’ packages to be more than $40,000. Each store will have about 1,500 square feet of space.

The Downtown Ithaca Alliance’s Business Retention and Development Committee evaluated 28 entries in the competition, which opened in February. It asked about half of the entrants to submit full business plans, offering them help through business counseling. A total of 11 entrants eventually submitted plans.

“An entry was like a pre-application,” Ferguson says. “I’d call that a Reader’s Digest business plan. It was a couple pages and helped us flag it if it was something that made sense for us to take to a higher level.”

The Downtown Ithaca Alliance looked at whether an entry was viable, compatible with downtown Ithaca, and able to be started in a timely manner when it decided which entrants to ask for business plans.

It also gave an edge to concepts for types of businesses it was hoping to add to the downtown area. They included footwear, specialty restaurants, children’s clothing, candy shops, women’s accessories, lingerie, and general retail merchandise.

Winning businesses had to be willing to sign a three-year lease, with only the first year being free. They also had to be ready to pay utilities and other occupancy costs, obtain financing within 60 days of learning that they won the competition, and open within four months of the award.

“We hope both will be open by the fall,” Ferguson says. “We know that the chocolate shop is shooting to be open in September. And I suspect the clothing store will be opened close to the same time as well.”

The Downtown Ithaca Alliance is now working to negotiate with individual property owners to find places for runner-up businesses, according to Ferguson. He isn’t yet sure how many runners-up will receive offers or what their award packages will be.

“There may be another four or five coming out of this,” he says. “We won’t be able to give them a year’s free rent, but we might be able to provide partial rent assistance.”

Ferguson didn’t share the financial details of the Race for the Space competition or the winning entrants’ revenue projections. The program wasn’t particularly expensive for the Downtown Ithaca Alliance to operate, he says, as the landlords involved offered free rent.

“It really was an idea to identify talent and get them focused and interested in trying downtown Ithaca,” Ferguson says. “We knew there’s a lot of entrepreneurial talent not only in our community, but in the upstate area.”