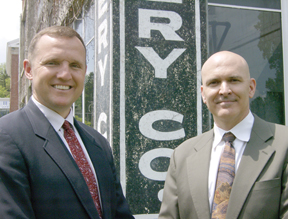 CAMILLUS — Sweet Spot Development of Skaneateles on May 20 announced the awarding of more than $5 million in construction contracts for the Camillus Mills project to Parsons-McKenna Construction Co. of Salina.

The first phase of the Camillus Mills project will cost about $12.5 million, Blair says.

“It encompasses all kinds of clean up, site remediation with the [New York Department of Environmental Conservation]’s brownfield-redevelopment program. We’re a voluntary participant,” Blair says.

It also includes oversight of debris-removal work along Nine Mile Creek, some work with the utilities, the renovation work inside the 45,000-square-foot building, and a new parking area, he adds.

The debris cleanup follows a fire on Feb. 11 that led to a fire-department order to raze nearly 80,000 square feet of vacant buildings on the site, Blair says.

The razed buildings housed the manufacturing part of the cutlery business, he says.

“The building that remains was really [home to] the administrative staff, marketing, distribution, [and] lighter uses, so it’s always been the really perfect component to be medical wellness, as compared to all the other buildings on site,” Blair says.

The process of removing the debris will begin in early June, says James (Jake) McKenna, president of Parsons-McKenna Construction Co.

Once the debris removal is complete, the work will then shift to renovating the existing building into residential and medical-office space,

“The phase three [portion] will be the site development, which will be redoing the site,” McKenna says, adding that the work will include a new parking area and landscaping.

Besides the Sweet Spot announcement about the Parsons-McKenna contract, National Grid on May 20 also announced a grant of $300,000 that Camillus Mills will use for brownfield redevelopment at the former Camillus Cutlery factory.

It’s a “modest” grant that will help pay for remediation and redevelopment costs at the site, says Kenneth Daly, president of National Grid, New York.

“The brownfield component is about taking places like we’re doing today and helping them redevelop, so it’s taking a business that used to be up and running … and is working closely with the developer providing a modest grant,” Daly says.

A brownfield is any real property where redevelopment or re-use may be complicated by the presence or potential presence of a hazardous waste, petroleum, pollutant, or contaminant, as defined by the New York Department of Environmental Conservation (DEC).

“It provides some incentive for lenders to put a package together that will power the project,” he adds.

Partnering with a utility company such as National Grid provides “a sense of confidence” in project among the local government officials and the lenders involved, Blair says.

Sweet Spot Development is also using the majority of a $2.5 million Restore New York grant to help finance the project, according to an article on the project in the Sept. 7, 2012 issue of The Central New York Business Journal.

The first tenants are expected to move in the summer of 2014 and the medical practices are projected to employ about 90 people.

The redeveloped structure will also include five second-floor apartments because village officials want people living downtown, according to Blair.