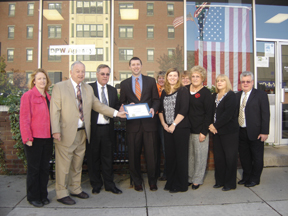 AUBURN — The Robert C. Dempsey Agency spent much of last year expanding to the north, launching a presence in Auburn in January, and then just two months ago, opening an office in Weedsport.

The insurance agency’s home office is in Groton and it has a second location in Moravia. To grow, the firm needed to expand into markets with more people, says Kevin Senter, an agent in the firm’s Auburn office.

“We always liked Auburn,” he says. “It just turned out this was the right time to open here.”

About halfway through 2011, the Dempsey Agency ended up acquiring the Auburn–based DPW Agency after it had opened its own location, Senter says.

“When we came in, it was just the right fit for [the owner],” he says. “It just was a good time for him and his agency to sell.”

Both employees of DPW, including the former owner David Wawrzaszek, still work with the Dempsey Agency in Auburn. The office employs six people total.

The Weedsport location has four employees, including one from the Biss Agency, which the Dempsey Agency acquired last year as well. Dempsey decided to expand to Weedsport after having been in Auburn for a few months.

The chance to acquire the Biss Agency came up and the opportunity to expand to another new market was too good to pass up, Senter says. The owner of that agency, Ken Biss, retired, he adds.

The busy year of expansion is not typical for the Dempsey Agency, Senter says.

The larger size of the Auburn area means a higher concentration of businesses for Dempsey’s commercial lines of insurance and more potential customers out there for its personal lines, Senter says. Business at the Dempsey Agency is split between business clients and personal, he adds.

The agency also works in health and life insurance.

And while the two new markets are larger than the firm’s home base, they’re still small. The Dempsey Agency is accustomed to working in smaller communities and it’s what the agency is good at, Senter notes.

“This is a big moment and big change for us,” he says. “We’re definitely excited to start growing and getting established and getting more people to know us.”