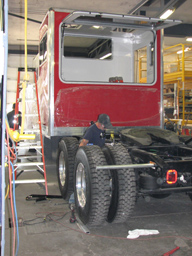 BARNEVELD — Even as governments on all levels continue to cut spending, RollingStar Manufacturing, Inc. is expanding its offerings to make sure business stays strong.

The company, founded in 1996, has served many levels of government with its custom-built trailers. Those trailers serve a range of purposes from command center to mobile-training facility, says Jamie Servello, who co-owns RollingStar with Dean Beck.

The firm recently began a trailer repair and service business to accompany its design and build work.

Since its launch, RollingStar built a steady business designing and building trailers for police and fire departments, the military, and even the Federal Bureau of Investigation. But orders, particularly from government entities, have slowed down lately, Servello says.

The company has always serviced the trailers it sold, he adds, so when he was looking for ways to increase business, it seemed logical to expand the service offering to anyone with a trailer. RollingStar will service just about any type of trailer, he says, from a simple cargo hauler up to a recreational vehicle. The only thing the company doesn’t do, he says, is engine work.

“I figured if I had a trailer and it needed repairs, who would I call?” Servello says.

Nobody knows trailers better than his crew, he says, because they build them.

Adding the repair service was fairly simple, he adds. He already has the staff and tools in his 10,000-square-foot workshop. He just needed to register with the state Department of Motor Vehicles as a repair shop.

The goal, Servello says, is to keep his workers steadily employed until the custom-trailer business begins picking up again. RollingStar has 16 employees, counting the two owners and the office manager. The rest of the employees work in the shop.

Servello declined to share financial information or any projections on how much revenue the repair service might generate.

Trailer-building will always take priority over trailer repair, he says, and the company is still scouting new trailer niches it can tap. Over the years, the company has also built fiber-optic trailers, kitchen trailers, vending trailers, and even a shower trailer.

RollingStar does not have its own marketing and sales force, but uses Trailer Marketing Services, Inc., in Westmoreland to promote its products. Mohawk Ltd. in Chadwicks also markets some RollingStar products.

Located on 35 acres at 125 Liberty Lane, RollingStar (www.rollingstartrailers.com) got its start with a fiber-optic splicing trailer built for use at the summer Olympics held in Atlanta in 1996.