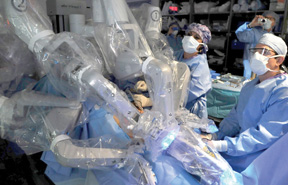 SYRACUSE — Crouse Hospital on May 14 announced it can now provide single-site robotic surgery on patients needing gallbladder surgery.
It’s a procedure that can leave the patient “with virtually no scarring and minimal pain,” the hospital said in a news release.
Gallbladder surgery is now part of a robotic-surgery program that covers specialties, including urology, colorectal, gynecologic oncology, gynecology, and general-surgical procedures.
Surgeons performed more than 600 robotic procedures at Crouse in 2012, making it “the largest robotics program in the area,” the hospital said.
An estimated 10 to 15 percent of American adults have gallstone disease, the hospital said.
Doctors diagnose about one million new cases annually, and surgeons perform about 800,000 operations to treat gallstones, making gallstone disease the “most common” gastrointestinal disorder to require hospitalization, Crouse added.
Surgery to treat this condition has become “significantly less invasive” over the past two decades.
Previously, surgery to remove the gallbladder, a procedure called cholecystectomy, involved a large abdominal incision and several weeks’ recovery time.
Nowadays, minimally-invasive surgical techniques have made open gallbladder removal nearly obsolete, Dr. Kenneth Cooper, a general surgeon affiliated with Crouse Hospital and a partner in Central New York Surgical Physicians, P.C., said in the release.
Cooper is the first surgeon in Syracuse to use the advanced da Vinci surgical system to perform gallbladder removal using the single-site technique, Crouse said. The procedure entails just one tiny incision rather the four required previously.
Crouse said it is the only hospital in Syracuse currently offering this procedure.
“The minimally invasive approach, [called] laparoscopy, is the standard of care today,” said Cooper.
Robotic technology supports the surgeon’s skill with three-dimensional (3D) computer technology, enabling the surgeon to see vital-anatomical structures more clearly and perform surgical procedures more precisely, the hospital said.
“The biggest benefit of the single-site approach is cosmetic,” Cooper said, since the procedure involved just one small incision in the belly button, leaving only a small, nearly invisible scar. “In most cases, this approach is preferred by younger patients who care about scarring, but it can be offered to almost everyone,” Cooper added.

Symptoms of gallbladder disease
The gallbladder is a small, hollow organ, shaped like a crook-necked squash, located below the liver.
The organ stores bile until it’s needed to digest fat from food. If chemicals naturally found in bile get out of balance, crystals form and can harden into gallstones which can block the flow of bile, causing pain, inflammation or infection.
Symptoms of gallbladder disease are often called an “attack” because the symptoms occur suddenly.
Gallbladder attacks often follow a fatty meal and may occur at night. A typical attack can cause steady pain in the upper, right side of the abdomen, and pain in the back between the shoulder blades and under the right shoulder.
These attacks may end when gallstones shift or move. However, if a blockage persists, the gallbladder could become infected and rupture.