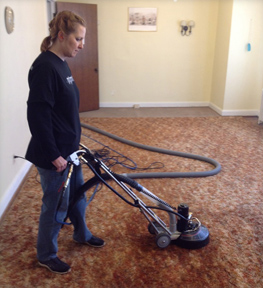 HOLLAND PATENT — A bout of illness caused by mold, a move to New York, and an advertisement in an in-flight magazine came together to lead Dennis and Sheri Osborne into starting their own floor-cleaning business, Redeeming Restoration.

The couple was living in California with their five children, when repeated bouts of illness led to the discovery of mold in their home. That led to the family moving to the Holland Patent area to be closer to Dennis’ family in May 2011. And that led to Dennis flying back and forth to California to continue his job as an operations engineer while he unsuccessfully sought employment in New York.

It was on one of those flights that he spotted an advertisement by The Master’s Touch (www.themasterstouch.net) — a Glendale, Ariz.–based firm that sells business systems in tile and grout cleaning — about starting a floor-cleaning business and wanted to look at the opportunity further.

Ultimately, the Osbornes opted to buy their own turnkey business from The Master’s Touch in March 2012, and in May, they launched Redeeming Restoration (www.redeemingrestoration.com).

Two things set the Osbornes’ business apart from other floor-cleaning businesses, Sheri Osborne contends. The first is the level of cleaning their equipment provides on a range of surfaces including carpet, tile and grout, brick, stone, wood, and concrete. The second is their guarantee. “If we can’t back up what we do, it’s not worth it,” she says. Basically, if you don’t like the job, they’ll redo it for free. If you still don’t like it, they’ll give you your money back.

To get the word out about Redeeming Restoration, the Osbornes have hit the streets for a lot of cold-calling to potential residential and commercial customers. Efforts have included sending out letters to residences and simply walking into a business and offering a demonstration of the cleaning equipment, he says. They are also members of the Rome BNI (www.bni.com) business-to-business networking and referral chapter.

And, the husband and wife duo says they are already landing customers, including Symeon’s Restaurant in Yorkville, Richardson’s Brands Company in Canajoharie, and the Wingate by Wyndham Rome hotel. The Wingate job, which included cleaning tile and grout along with the hotel’s dining area and conference room, was so successful it has already led to another job at the hotel, Sheri Osborne says. In November and December, the Osbornes will be cleaning the entire hotel.

Those are the jobs and the repeat customers the Osbornes hope to continue to land through their maintenance program. Having customers lined up for regular work throughout the year will go a long way toward providing steady income, they say. The Osbornes declined to share any financial projections for the company.

So far, the Osbornes’ are the only employees at Redeeming Restoration, but as business continues to pick up, they are considering hiring an employee.

“The last two weeks, it’s started to explode,” Dennis Osborne says of customer interest in his firm’s services. He anticipates they may need to hire someone within the next two months.

The Osbornes declined to say how much it cost to start up the business, but information on The Master’s Touch website lists business packages ranging from $15,500 for a basic start-up package to $49,900 for its top-of-the-line package. The Osborne’s business is not a franchise and does not pay any royalties to The Master’s Touch.

Along with the cleaning equipment and cleaning solutions, those who buy a package and launch a business also receive a website that The Master’s Touch designs and hosts for two years, business cards, sample videos to demonstrate the products, and brochures and other marketing materials. Those who start a business are also required to attend a five-day training session at The Master’s Touch in Arizona.