ConMed wins Defense Department contract worth up to $36 million 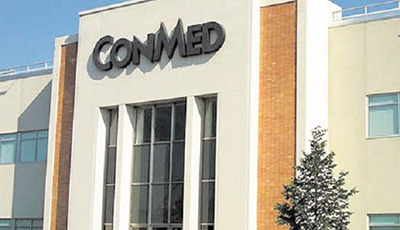 UTICA — ConMed Corp. (NASDAQ: CNMD), a Utica–based surgical-device maker, has won a contract from the U.S. Department of Defense, worth up to $36 million over five years, to provide medical equipment to the U.S. military branches.

The company has been awarded a maximum $36 million “fixed-price with economic-price-adjustment, indefinite-delivery/indefinite-quantity contract” for hospital equipment and accessories for the Defense Logistics Agency electronic catalog, according to a Defense Department announcement.

It was a competitive contract solicitation with 102 responses received. This is a five-year contract with no option periods. The work will be completed in New York state, with a Dec. 29, 2024 performance completion date. The military services using the equipment are the U.S. Army, Navy, Air Force, and Marine Corps.

ConMed says it’s a medical technology company that provides surgical devices and equipment for minimally invasive procedures. The firm’s products are used by surgeons and physicians in specialties including orthopedics, general surgery, gynecology, neurosurgery, and gastroenterology.