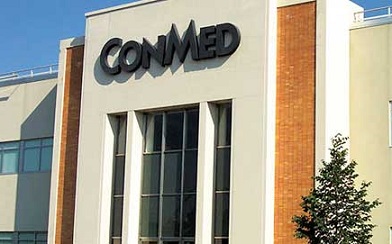 UTICA, N.Y. — ConMed Corp. (NASDAQ: CNMD), a Utica–based manufacturer of surgical devices, reported net income of $10.7 million, or 37 cents a share, in the first quarter. That’s an improvement from a net loss of $4.5 million, or 16 cents per share, in the year-ago quarter.

ConMed’s first-quarter earnings included a tax expense of $300,000 resulting from adjustments to its December 2017 tax balances related to the 2017 Tax Cuts and Jobs Act, the company said in its earnings report. Excluding that and other special items like restructuring costs, business-acquisition costs, and legal costs, ConMed reported adjusted net income of $15.1 million, or 53 cents a share. That beat the consensus analyst estimate of 43 cents a share, according to Zacks Investment Research.

“We are pleased with our first quarter results, in which we delivered 6.8 percent constant-currency revenue growth and 13.9 percent adjusted EBITDA growth over the prior year,” Curt Hartman, president and CEO of ConMed, said in the firm’s earnings report. “Looking forward, we are increasing our outlook for 2018, while continuing to invest back into the business to strengthen the long-term revenue and earnings profile of the company.”

EBITDA is short for earnings before interest, taxes, depreciation, and amortization.

ConMed now expects full-year 2018 constant-currency sales growth in the range of 4.5 percent to 5.5 percent, compared to the previous range of 4 percent to 5 percent. Based on recent exchange rates, the positive impact to 2018 sales from foreign exchange is anticipated to be between 100 and 150 basis points, which is “consistent” with its previously issued guidance.

ConMed is a medical-technology company that manufactures surgical devices and equipment for minimally invasive procedures. Surgeons and physicians use its products in specialties that included orthopedics, general surgery, gynecology, neurosurgery and gastroenterology, the company said.

ConMed has a direct-selling presence in 19 countries, and international sales constitute about 50 percent of the firm’s total sales. It employs about 3,100 people.