Cleanup at Massena GM site moves ahead with redevelopment efforts 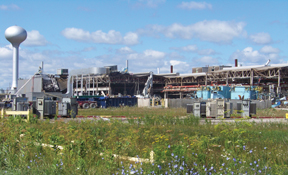 Work at the carmaker’s shuttered powertrain operation near the banks of the St. Lawrence River should finish by late 2015 or early 2016, says Brendan Mullen, New York cleanup manager for the RACER Trust, which owns the site. The trust was created in March 2011 by the U.S. Bankruptcy Court as part of GM’s bankruptcy, which was filed in 2009.

The trust is working on cleaning and redeveloping former GM sites throughout the country. When first formed, RACER owned a total of 44 million square feet of industrial space in 66 buildings, although it has since sold some of its properties.

A sale is the ultimate goal for the Massena site, says Bruce Rasher, RACER’s redevelopment manager. As the cleanup process proceeds, RACER is already talking with parties potentially interested in acquiring the 220-acre site.

It’s possible, a sale could close before cleanup is even complete, he says. RACER would continue to oversee the cleanup work if that happened.

Rasher declined to discuss details of the prospects he’s been in touch with, but says they include companies in manufacturing and energy. The site, Rasher says, has access to high-capacity, low-cost power, rail, and waterways that make it attractive to firms in those sectors.

“We think that the site is extremely valuable in terms of attracting a user with jobs that will make investments and redevelop the site,” Rasher says.

Rasher says he doesn’t have an estimate of when a deal for the site could close.

“We have some parties that are taking a very serious look at that property,” he says.

A large amount of cleanup work has already been done on the site, Mullen says. A project to demolish the site’s main plant, which totaled 855,000 square feet, had already started when the trust formed in 2011.

That project finished in late 2011, Mullen says. It was followed by a second phase that involved the concrete slab below the building.

Workers removed the slab and tunnels that were below the building and cleaned contaminated soils, Mullen says. That project wrapped up in 2012.

A third phase will start at the end of March or in early April, Mullen says. Perras Environmental Control, Inc. of Massena won the contract for the work. The firm has worked on the GM site in the past, according to RACER

In the current phase, Perras will dismantle three buildings remaining at the site, including one structure totaling 21,500 square feet and another totaling 10,000 square feet.

Perras will also excavate and remove about 58,000 cubic yards of contaminated soil, according to RACER. Three process-water lagoons will also be drained, excavated, and filled with clean soil.

All of the contaminated material will be sent off site in rail cars, according to RACER. Between 25 and 30 Perras employees will be at work on the project most days.

The current phase should end in November, Mullen says. After that, RACER still must complete some additional excavation and removal of contaminated material.